We all know that feeling. You finally get off work after a long week and arrive bright and early on a Saturday morning to a tournament. This is going to be a great weekend! You’ve said hi to your friends and traded old stories from years gone past. You sit down and get out your favourite team. Your opponent is happy chatting away and everything is great. You even win the kick off roll. Here we go, get those mega punches in early. You shake hands. Your opponent rolls.

Your heart sinks. That buzz you were feeling evaporates as quickly as the opposition players flood into your half of the field. 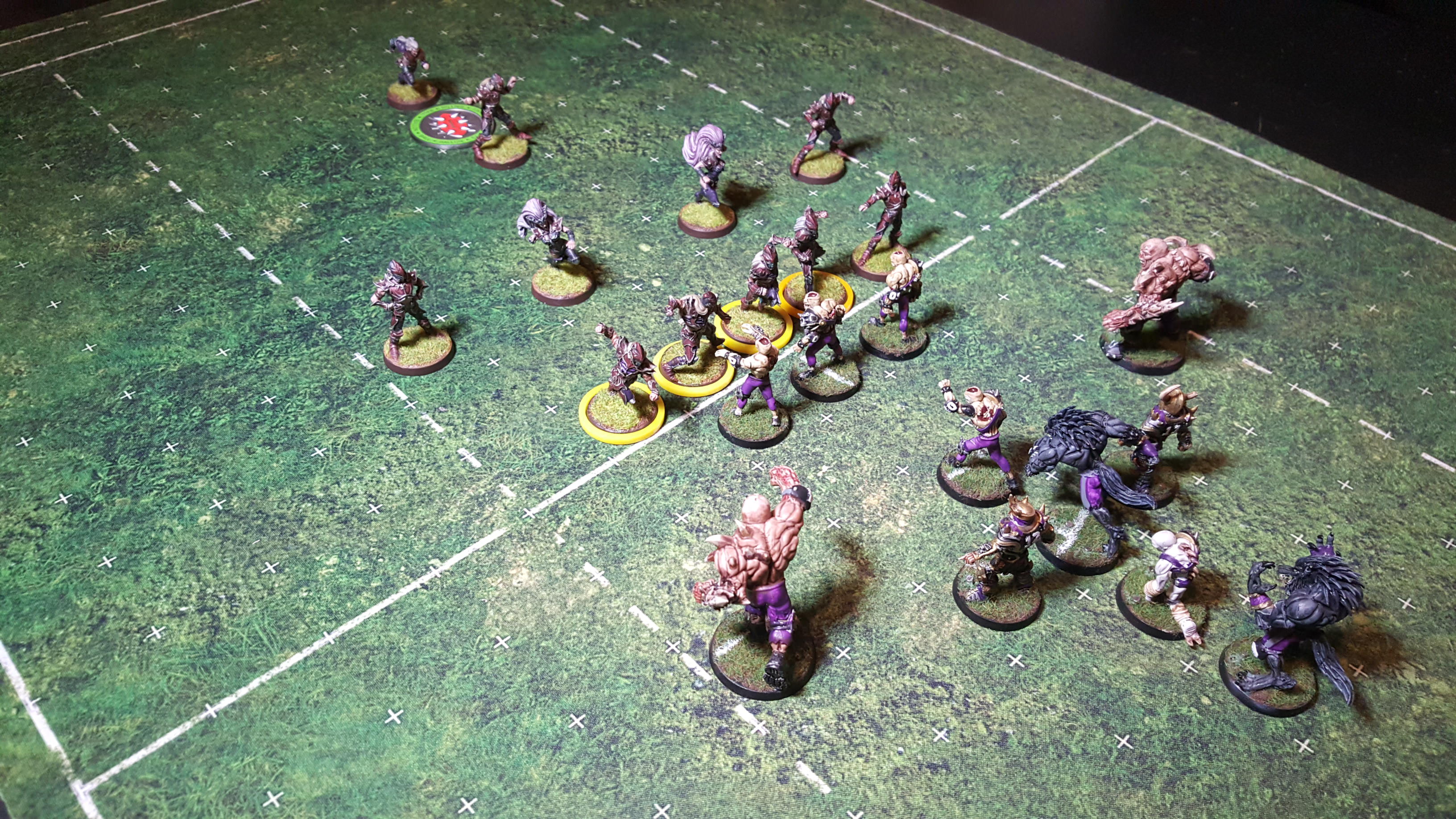 Here we have a bad offensive formation. The Necromantic team has set up in a standard defensive formation that protects their key players from a 1st turn attack. The Dark Elf team has set up with the 4 Blitzers on the LoS ready to do some diagonal blocking, making those first hits with the Block skill to prevent a 1/9 turnover. This gives them ample opportunities to knock down all three Zombies before picking on the middle zombie and setting up a screen to begin their drive.

The Necromantic player kicks to the ‘safe spot’ and then this happens. 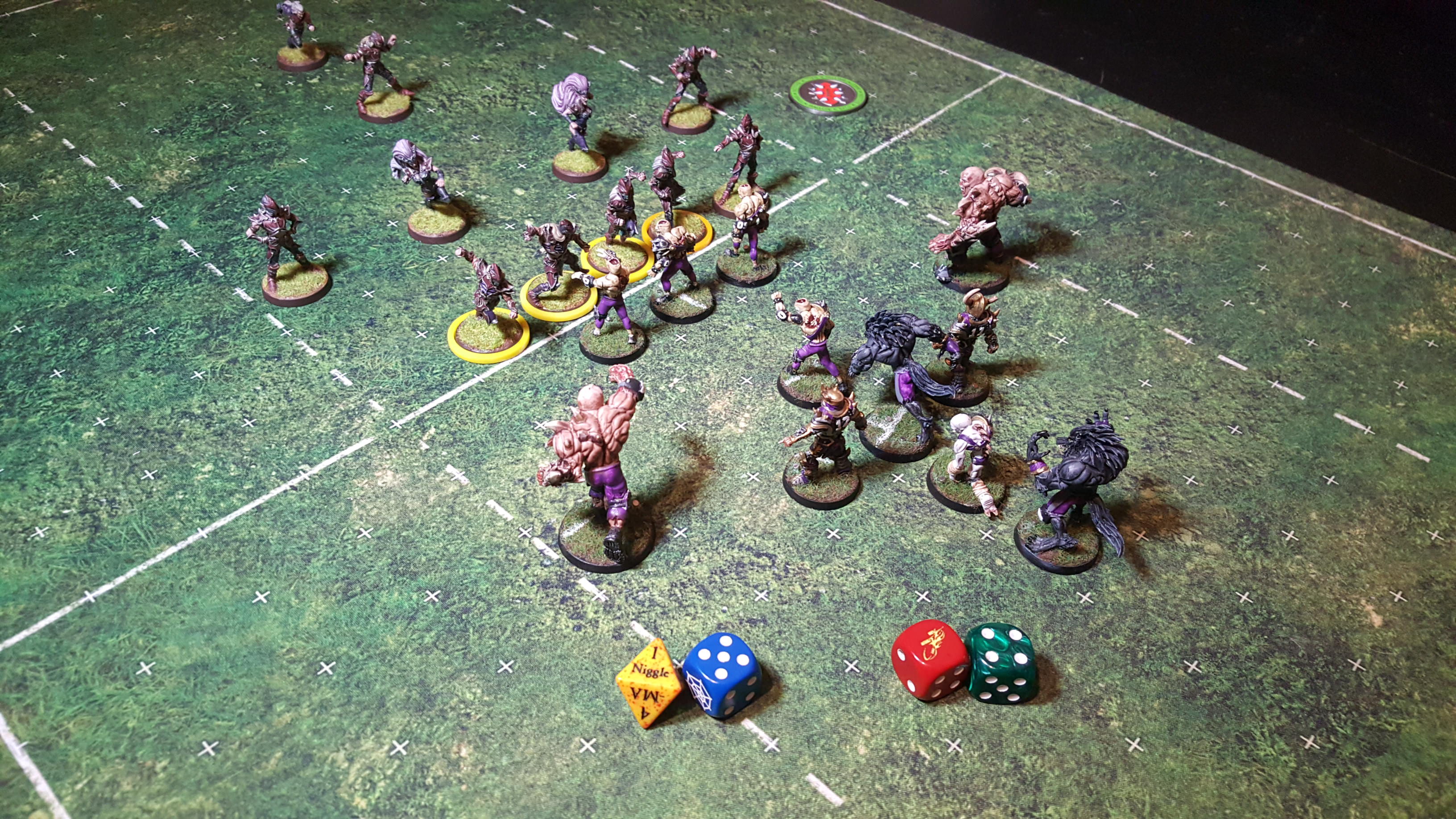 The kick goes 5 squares to the front and a Blitz! kickoff result is rolled. The ball is now hanging in the air – important as well because it means that getting under it is a free action (no chance of failing a pickup if it is still in the air!), and also you can move through that space. This gives the Necromantic team ample opportunity to press in hard and form a cage around the ball with someone under it. 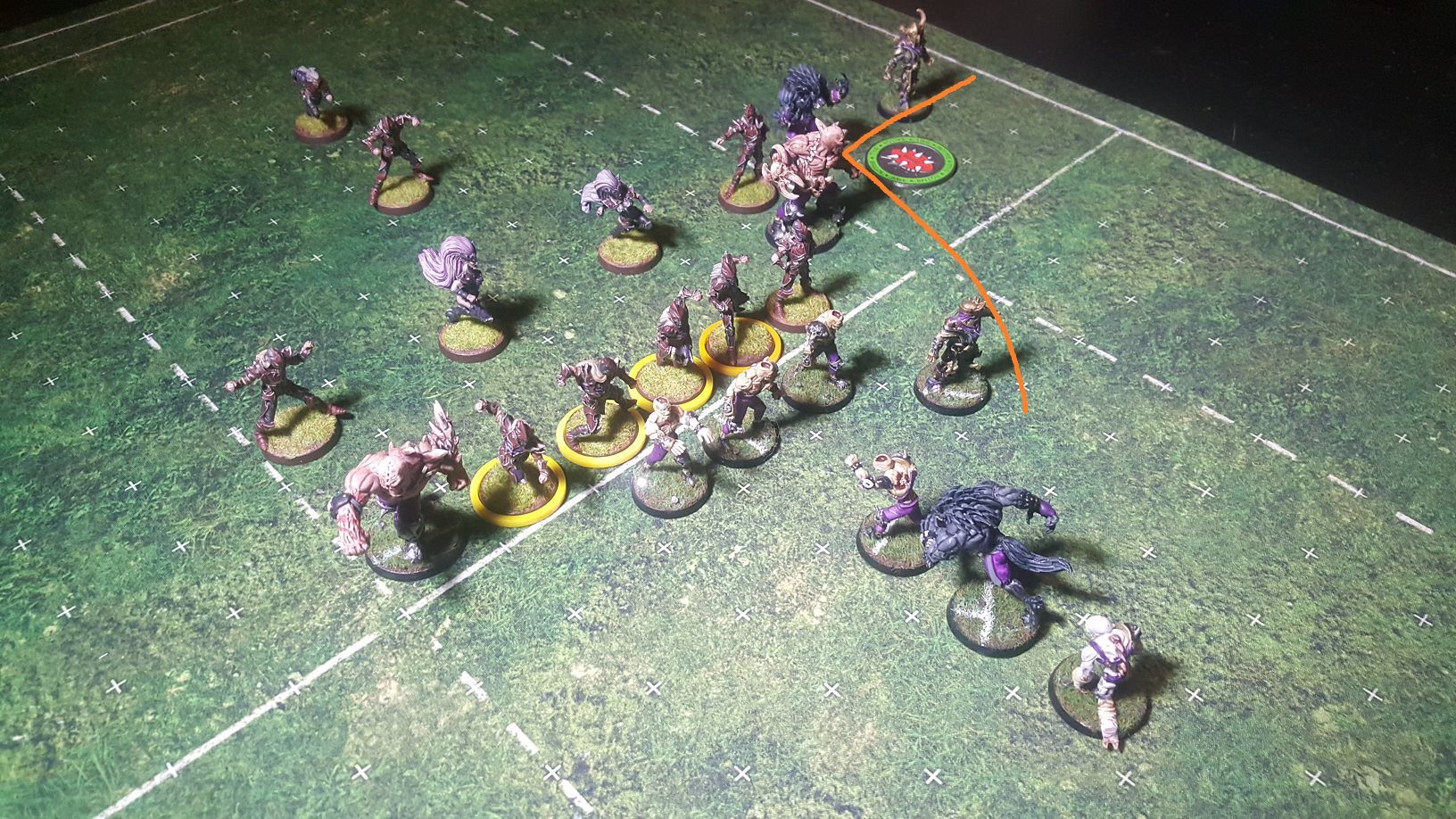 First the Flesh Golems move in to trap the opposing side making it hard for them to effectively block the Zombies on the LoS (which remember cannot take an action). Then the other players move up and under the ball before the Werewolf blitzes the Lineman next to the Flesh Golem near the ball. There’s a bit of a risk in exposing the Wight to a surf but it is worth it to form the cage. The idea here is that we are trying to form a good screen along the orange line. The risk is that without this a series of 1 die blocks against the Zombies on the LoS will allow some nasty players to get behind or through and hit the ball carrier. The Necromantic player wants as much control as possible at this point, and not to allow an elf play to undo the good luck of the Blitz! roll. 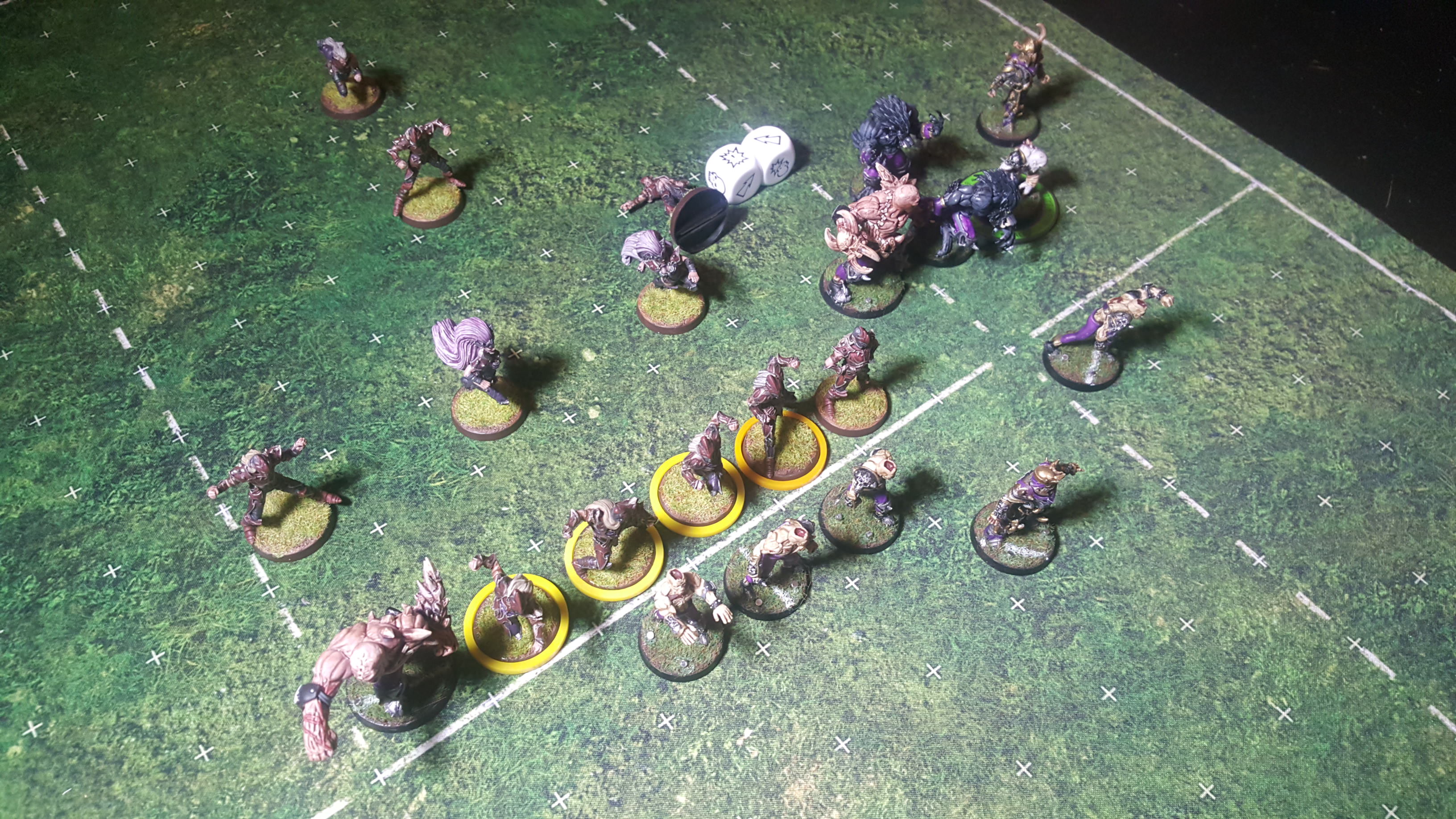 The Ghoul moves up to get under the ball, the Werewolf hits the Lineman and then helps form the cage and then the final Zombie moves up to close the gap. In an ideal world we’d not have players stood next to the Ghoul. The reason is because if the Ghoul fails to catch the ball (and it’s a 4+ to do it) then it could fall to one of the players forming the cage, and then if they fail it could fall out of the cage altogether. This would leave the Elves with a 3+ pickup, or a 2db for a 2+ pickup. All in all barring some very bad luck on the catch and bounce this is a disaster for the Dark Elves. 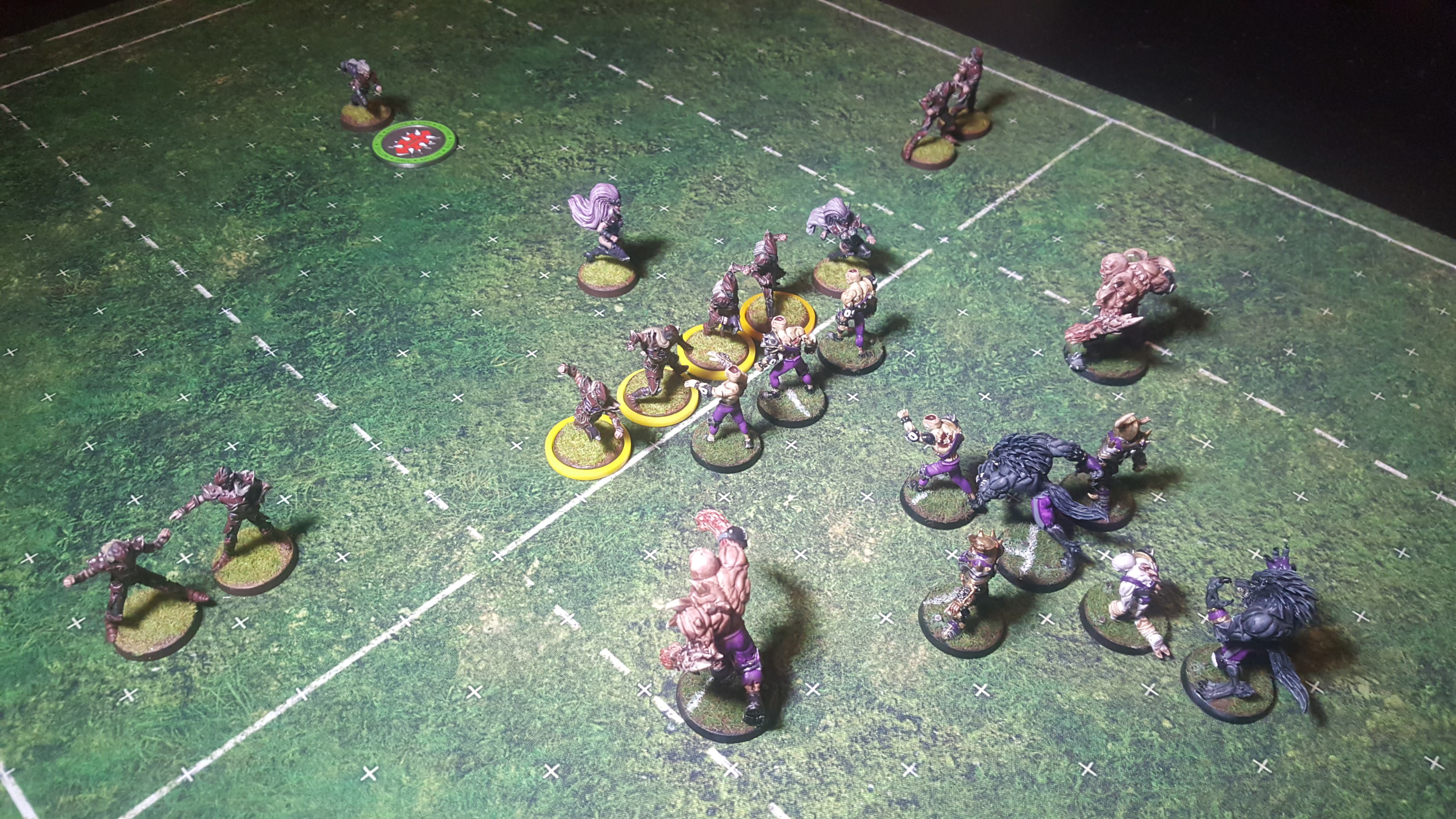 As the coach of the offensive drive the Blitz! result is the one that you should really be thinking about. Perfect Defence can be annoying (more in a future article) but it is rarely a disaster. It can kill your momentum or let some opposing players off for free, but it doesn’t cause you to lose the ball instantly like a Blitz! can. As such this kickoff result is the main thing you should be worried about. Setting up for diagonal blocking is a good tactic, but setting up the anti-Blitz! is good strategy.

The above situation is a better setup. With 2 players covering those high flank areas even if one is blitzed away there is another there to be annoying and prevent easy cage formations. With a player near the edge and a loose screen then there will have to be dodges unless one player is blitzed. But there are significant problems as well. The first one is that you have left a surf on. 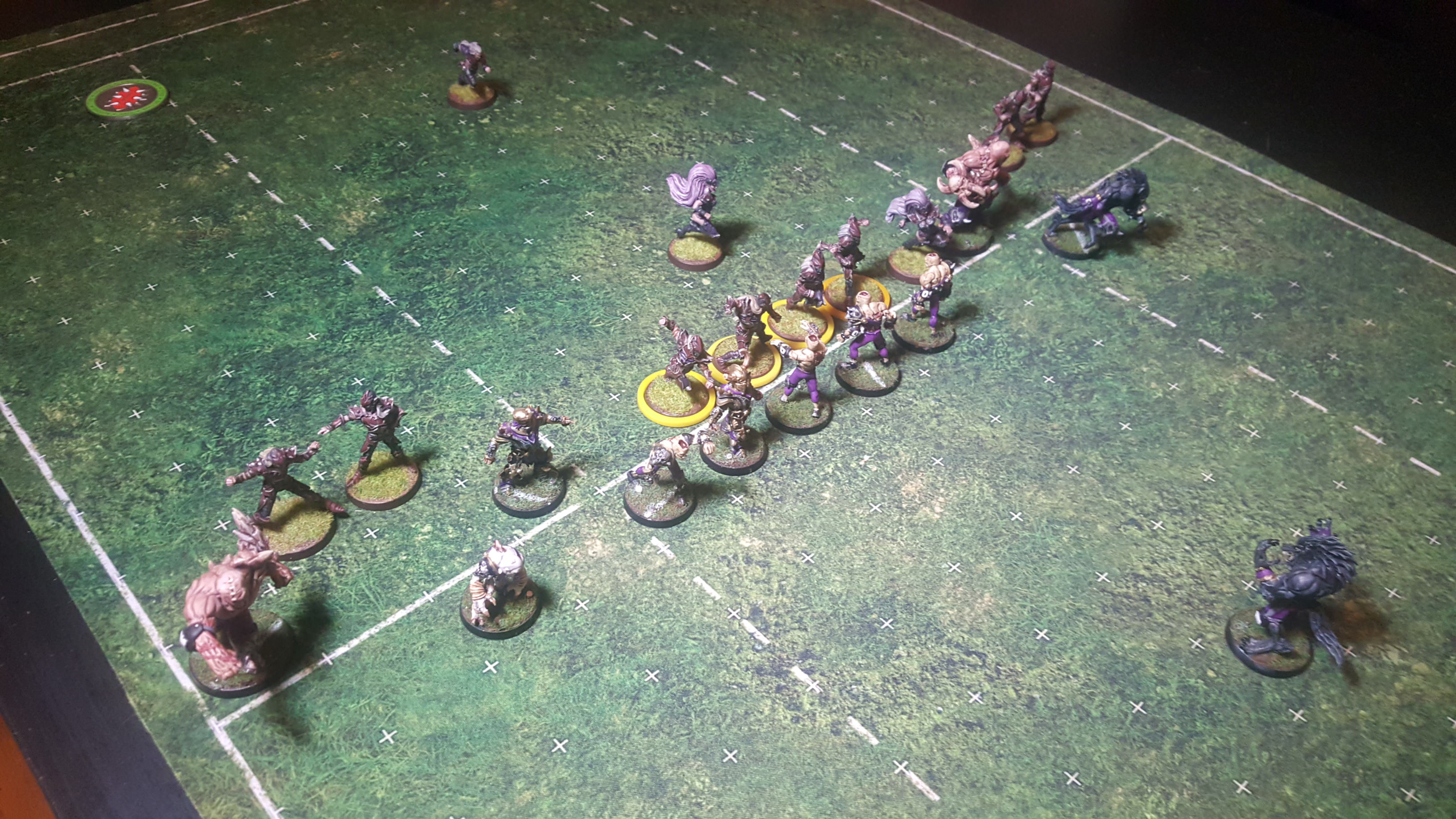 A Blitz! has been rolled but the ball has gone deep. This means that the Necromantic player is not looking to win the ball right away. To send fast players down there against Ag4 would be just exposing them to being hit – and as these are your key Werewolf and Ghoul players that’s not something you really want to be handing up so easily. So the Necromantic player just jams their players into the LoS to make it really hard for any of them to be blocked. Meanwhile the Flesh Golem (with the added safety in this instance of Stand Firm) puts an assist on. You know what’s coming next! 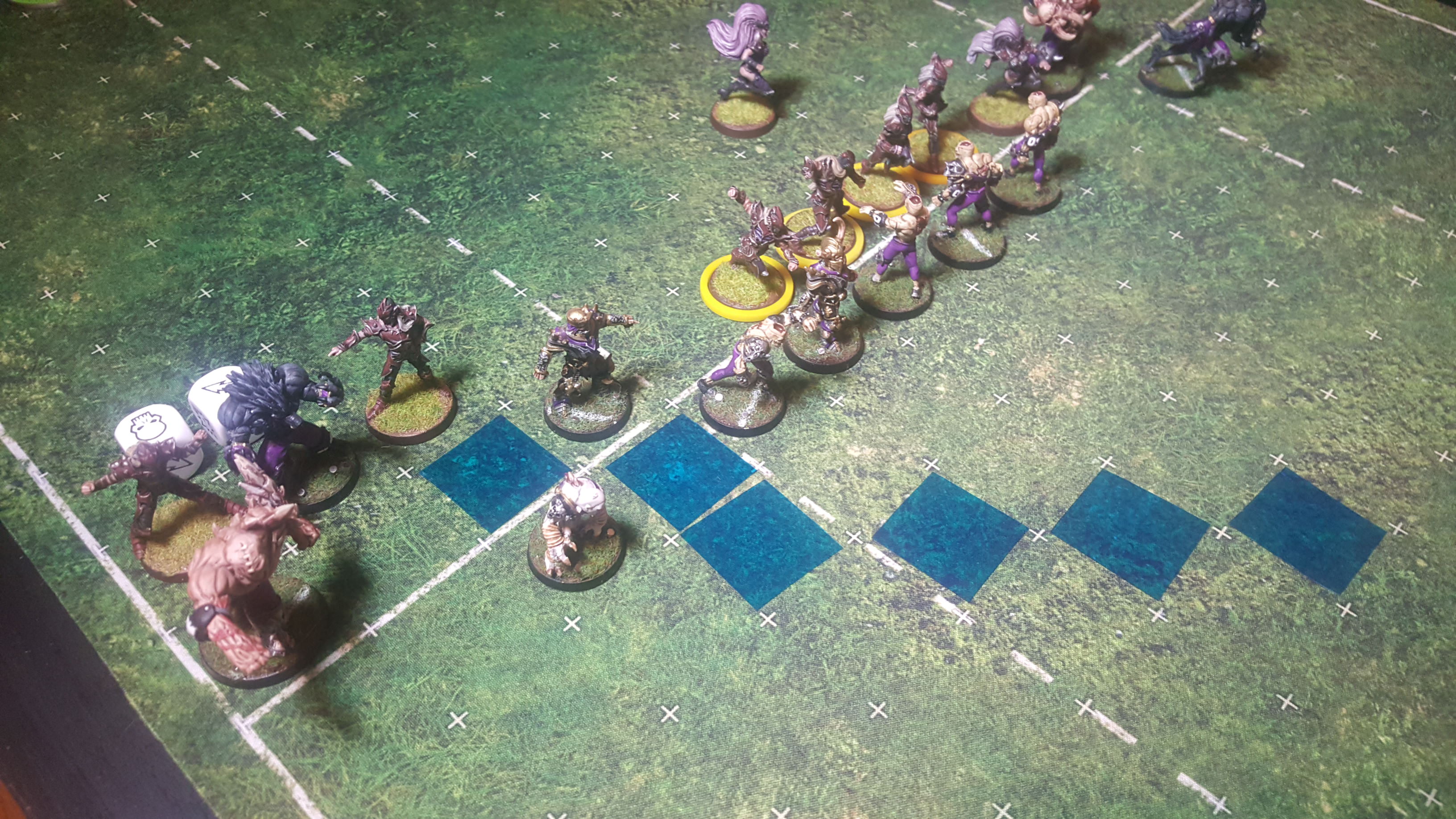 Nope, not double skulls. Although that it 98% likely to happen when you have a surf on.

The Werewolf finds the pushes to surf the Lineman off the pitch and the Dark Elves are 10 v 11 from the get go. The Werewolf then does a GFI to get back to cover the Flesh Golem (the right square especially if it was not a Flesh Golem but something without Stand Firm). Even if the Dark Elf coach does cut the assist from the nearby Wight and then 1db with the Lineman on the Werewolf it is still not possible to surf the player near the sideline without a -2 dodge. 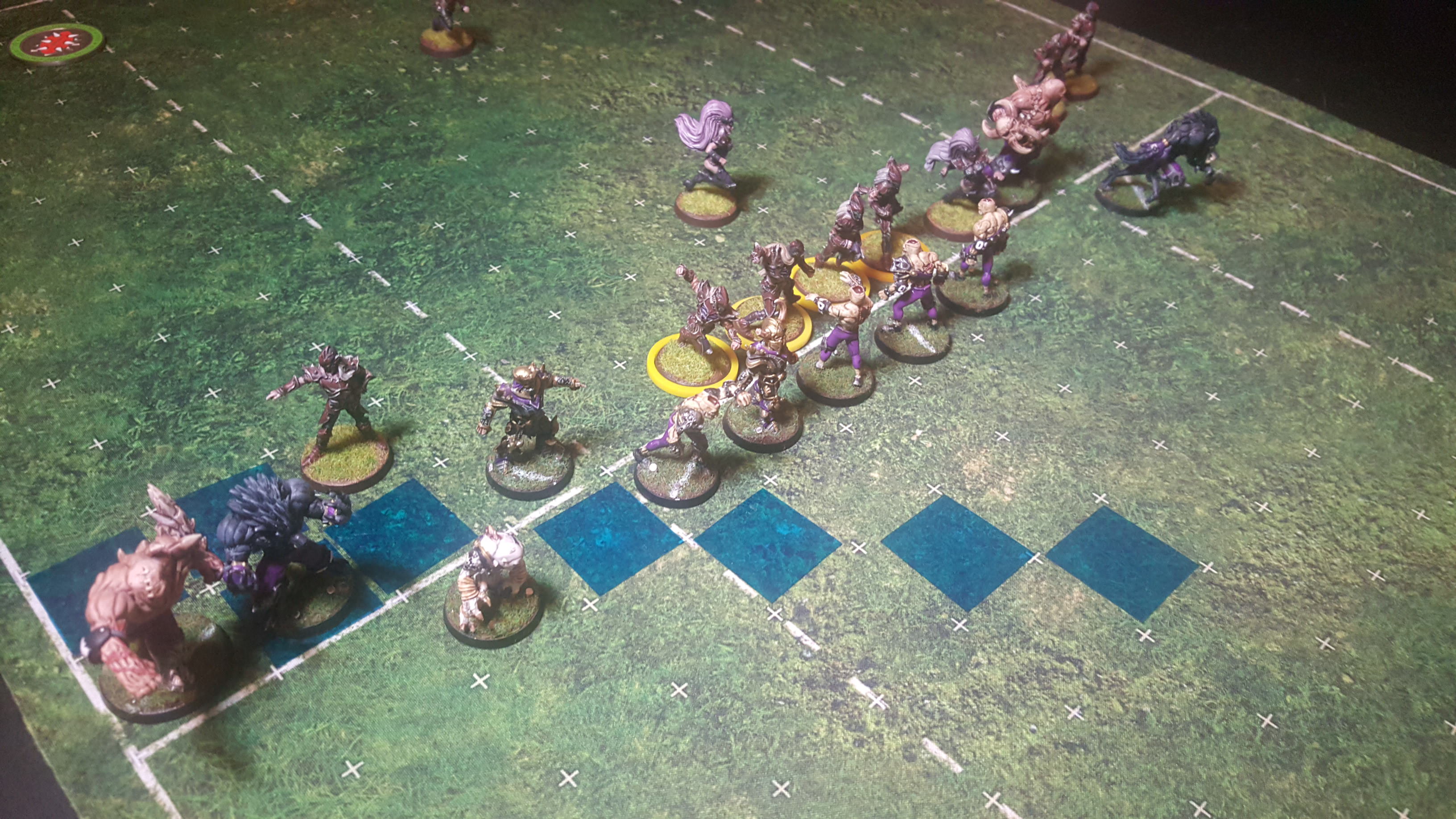 It is just about possible to surf the Werewolf with the Witch Elf but it would take a lot of effort, leave the ball vulnerable, and leave more Dark Elves in surfable positions the next turn. Overall the Dark Elf player is best off just consolidating their position and trying to rebuild their drive from there.

The second problem with that formation is that you have over-committed to defending the corners. Now I know I said that the anti-Blitz! should be foremost in your mind, and that is true. But the ball might not be going into that corner. There’s a 2/8 chance it will hit the right diagonal, and then a 1/3 that it’ll hit the 5 or 6 squares required to make it such a shallow kick. There’s a much greater chance that it will end up somewhere not far from the middle of the pitch. By covering the flank with 2 players the defensive formation has made the single-bank loose screen too weak. 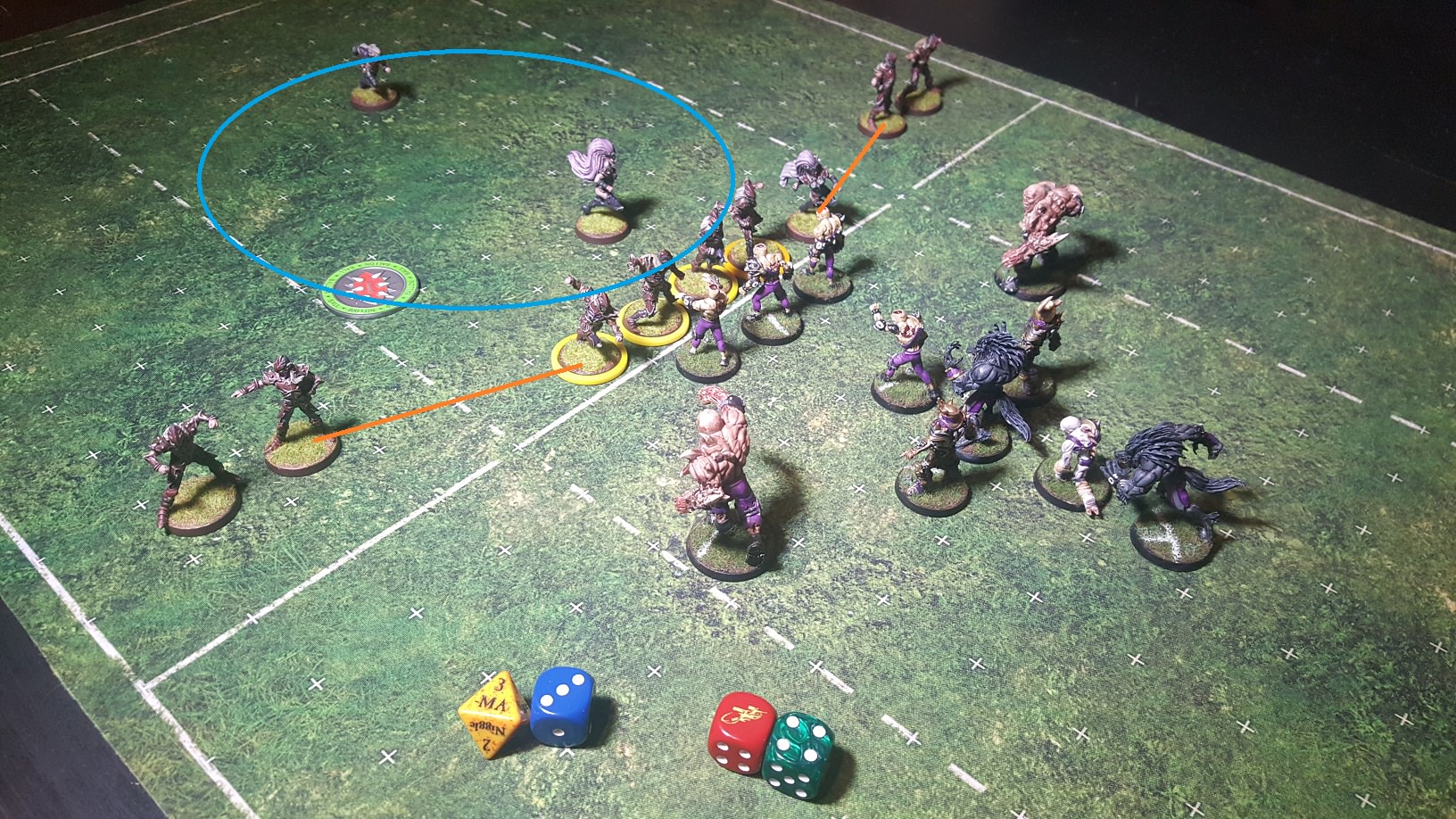 Here we have just a single bank loose screen (see the tactics article on Screening for more information). Blitzing either of the players forming that screen for a 2db is easy and then the whole of the backfield (denoted by the blue circle) is open for you to pour players into. If the Flesh Golem gets even a push on the left-side Dark Elf Blitzer the Werewolf can get ahead of the ball for free, and the Ghoul can be under it with 1gfi. Or the Flesh Golem (in this example using the ST4 stat to good effect) can take out the Linemen solo. 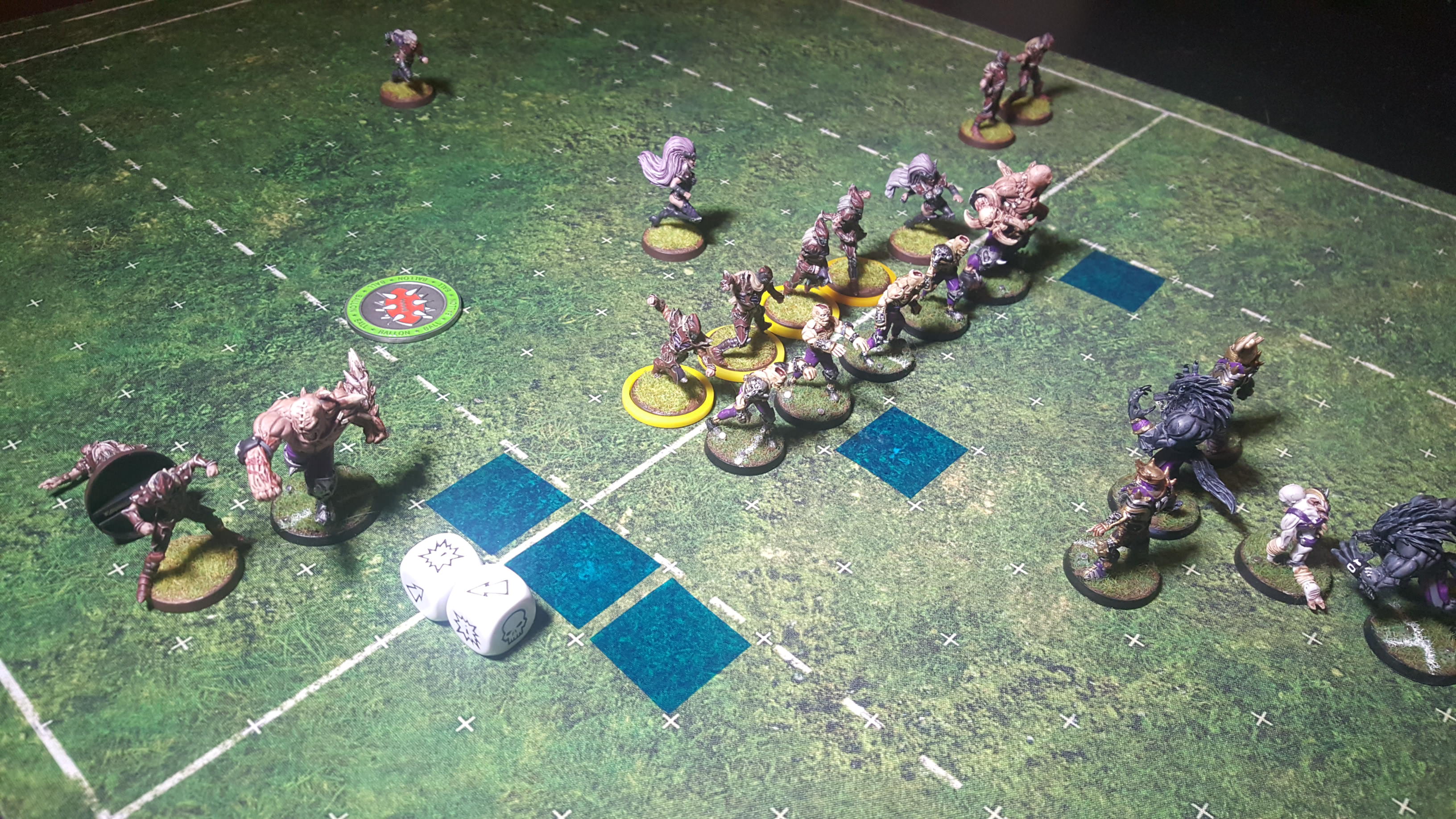 The Flesh Golem gets the knockdown as other (slower) players move up to create a nuisance on the line. 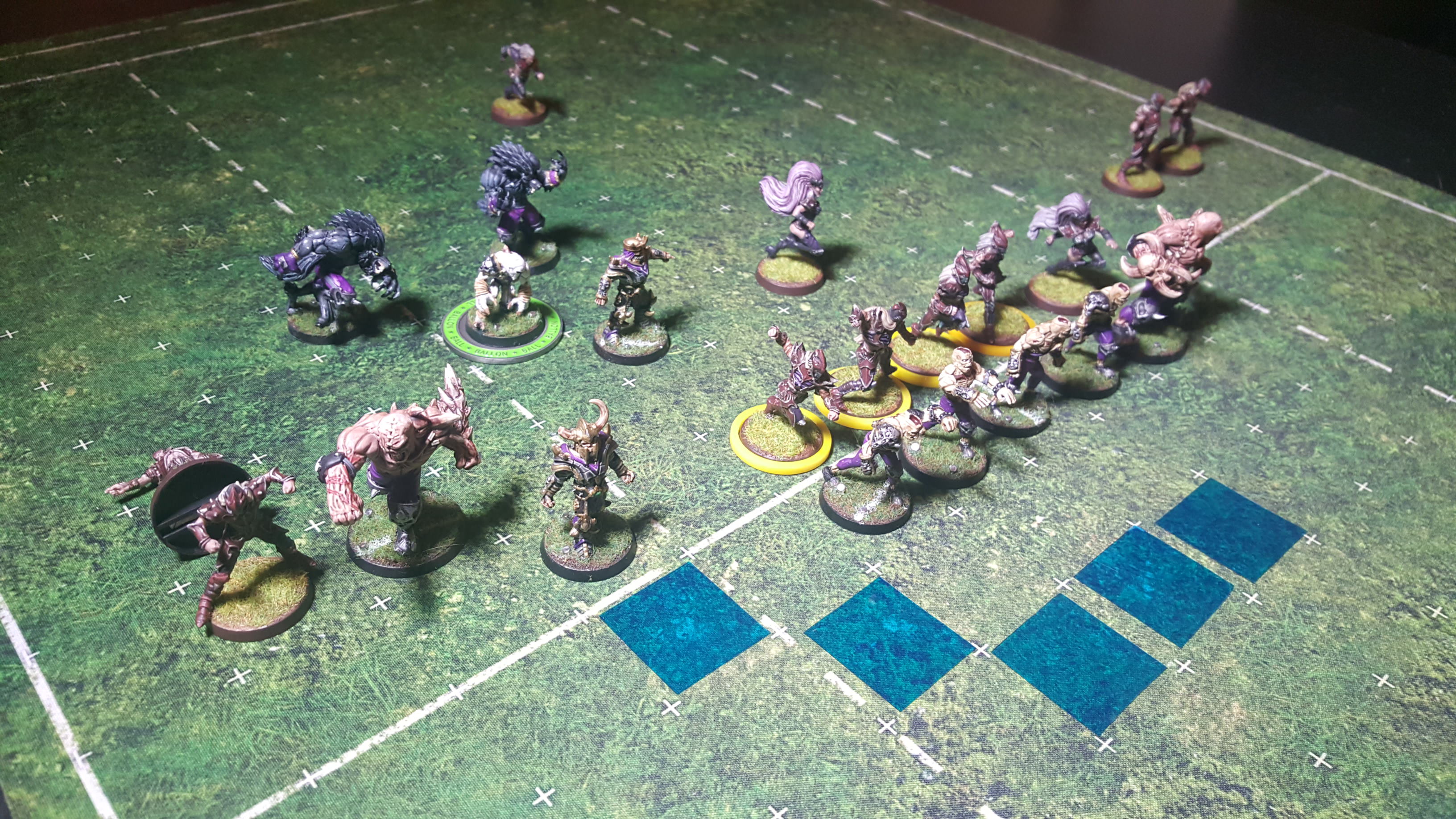 With some gfi players can even start to form a cage around the ghoul. The Wights are particularly important here. The one next to the Ghoul is preventing the left-most Dark Elf blitzer from escaping without a penalty to the dodge roll, pinning him against the Zombie and closing the channel from the middle to the left side of the pitch. The Dark Elf player would need to make two 1db with the Blitzers in order to re-open this channel or free that Blitzer up. And then even if that does happen the other Wight is blocking things from going any further – effectively closing that side of the cage even though it has not been. This leaves the Dark Elf player in desperate time. 4+ dodge cage break for 1 dice on the ball carrier (assuming he caught it!), or half dice block against the Flesh Golem needing a knock down? Both are pretty crumby options for your first turn of the game.

So how should it be done?

That depends a lot on the team you have and the team you are facing, but the following picture is a good compromise example with the above principles in play. 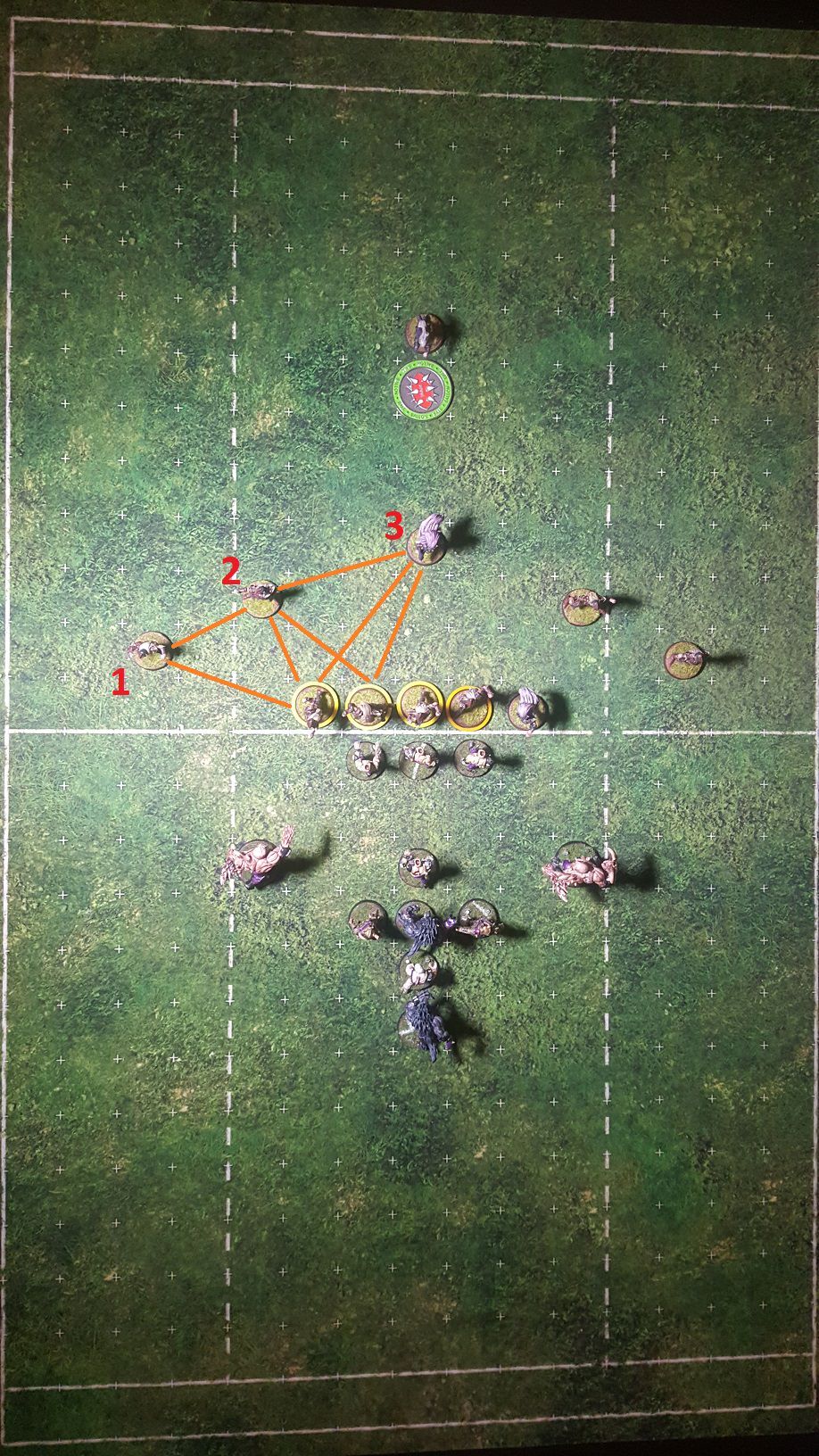 The point of this formation is that it strikes a balanced compromise. You fear the Blitz! but you don’t want to over-compensate, so you put 5 of your players on the LoS to ensure that all 3 opposing players get knocked down. That leaves you 5 players left after you have set a ball carrier. It’s essential to have that central screen so you need the central player with 2 more 3 squares either-side. If you push them any wider you leave an easy dodge through which could be a disaster. These players (marked “2” in the picture) also are protected by the wider player which means that a 3 or 4 square kick into that diagonal means that the catch would have to be adjacent to them. Plus here, and on a 5-square kick, it is impossible to form a perfectly safe cage either. You are giving up the 6 but you can’t cover everything.