One of the most interesting parts of the game for me, tactically, are the setups. A lot of this derives from my love of chess and the need to study opening positions. Blood Bowl is a far more complex game than chess (having a far greater number of possible moves multiplied by the random nature of the dice rolls), and so this means that study of a part of the game that you can control is even more important. Games can escalate quickly, with a bad start quickly culminating in a lost ball. It should therefore be of interest to even more casual players to get the start right.

I will go into defensive setups in a future article, but for now assume that the above picture is what I would consider to be a standard defensive setup. With the belief that my opponent can engineer a 2 dice block on pretty much anything I put there, and not wanting to risk losing a good player early, I find the 3 most expendable players and put them up front supporting each other. The good players are then screened with whatever else I have left. For the purposes of this article we’re just going to focus on the front 3 players, and what the offensive driving coach needs to do. But first let’s have a quick reminder of the stats of blocking:

Chance of an opponent knockdown on 2 dice:

The number one mistake I see new coaches make is blocking straight ahead. Indeed it’s not only a tactical mistake in that situation but it can harm your entire game as an experienced opponent will notice this mistake and likely play in a different style to capitalise upon it. Good coaches usually have experience in dealing with pressure, but a newer player can often be brought down by a high press game in the right place early as they’ve not played enough games to know how to deal with such a strategy. All it takes is a couple of bad dice rolls and you are in a position where the opponent has a lot of momentum against you. Momentum in this context means the ability to create strong counter-play by, for example, having players stood next to yours so that they can block back on their turn. 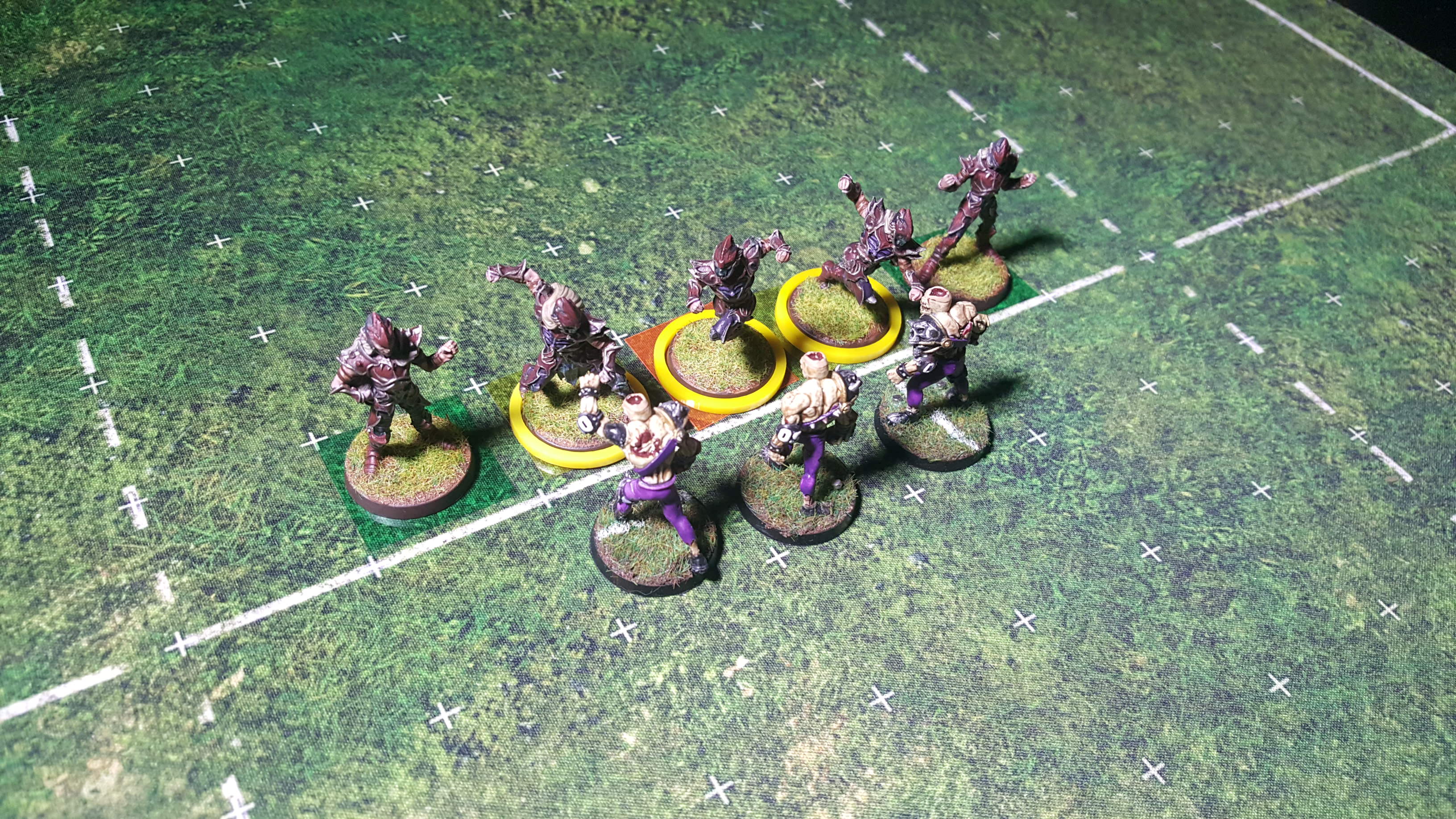 Here’s an example of a Dark Elf team (Blitzers with yellow skill rings) blocking straight ahead against some Zombies. The left-most Blitzer has 2 dice against the left-most Zombie due to the assist from the Lineman. Remember that a green square has only 1 enemy tackle zone on it, and so can provide an assist against the enemy player it is coming from (yellow squares are 2 tackle zones, and orange squares are 3 tackle zones). 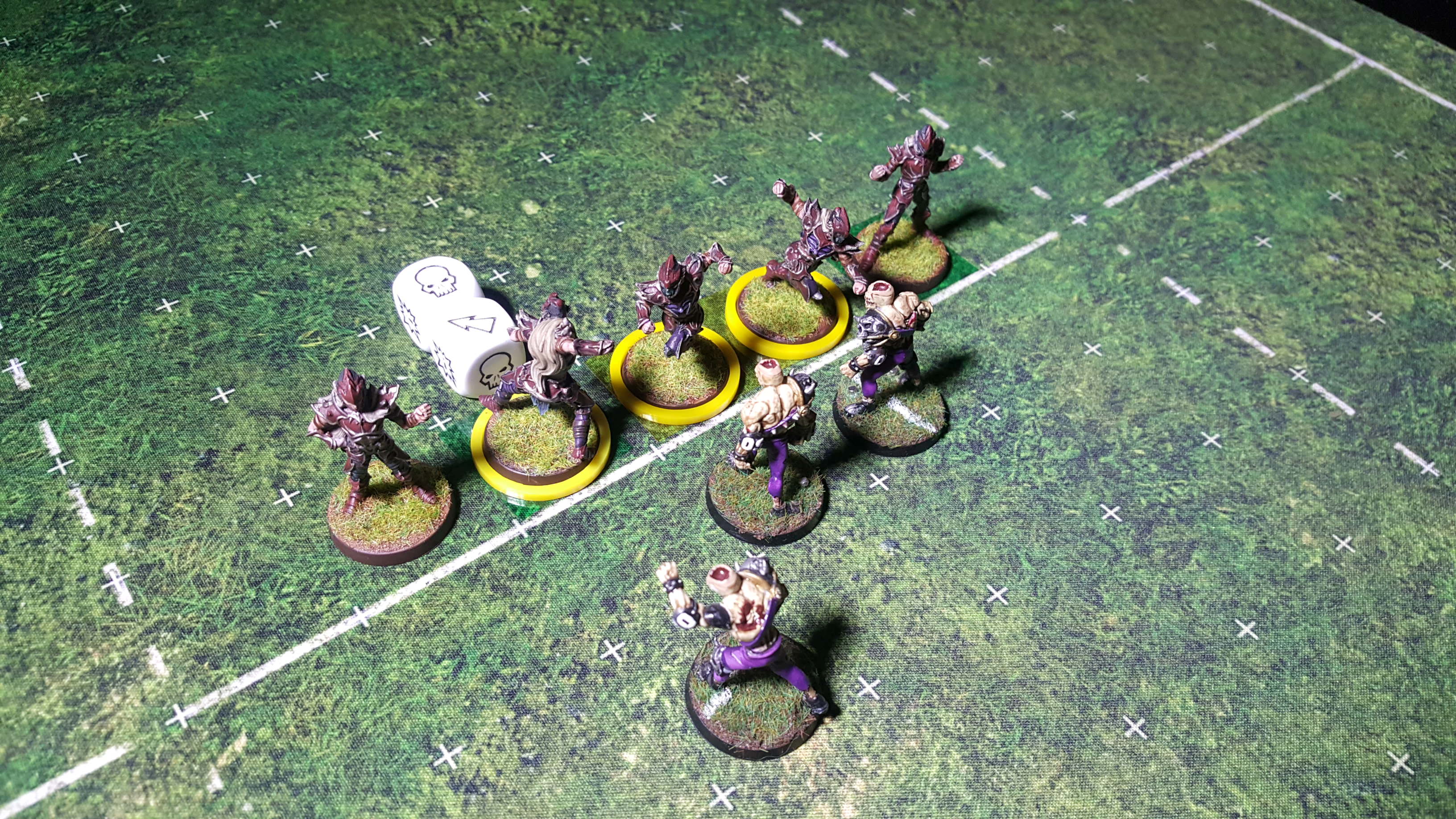 So the Dark Elf coach rolls the dice and… push. Now this is a real problem already. The Blitzer who made the block cannot follow up into the Zombie and still provide an assist (as the other Zombie has been moved back his square has changed from yellow to green). Now you could follow up here aiming to blitz that Zombie after you have started your block from the other side but the same issue could occur. At a 25% chance of not making a knock down the chances that both of these straight blocks fail is 6.25%, and that may not sound like a lot but it is, on average, going to happen once every 3 tournaments on your first two block attempts, and that’s not forgivable for something that is entirely preventable.

It is also wasteful on resources in 2 areas. Firstly the maximum number of enemy players that you can knock down on your first turn is 4 (assuming no error in setup). If you push that first Zombie and then plan to blitz them later then you have reduced the number of enemy players that you can knock down to 3. So that’s a 25% drop in your potential knock downs just from getting a push on the first result. Secondly, and this is a little more abstract, because the block has come from a player with 2 enemy tacklezones in that square you have wasted the opportunity to take a block from one with 3 enemy tacklezones in that square. When enemy players are moved or knocked down you tend to reduce the number of tackle zones on your players until eventually none are left and that player is freed up. It is easier to go from 2 tacklezones to 1 than from 3 to 1, so you are wasting the chance to have one of your players freed up so that they can do something useful elsewhere. This is important because once a player has made a block the only thing that they can do in the rest of your turn is provide an assist. So being able to get players in 3 tacklezones down to 1 quickly helps with them making vital assists later in the turn.

So what is the answer? 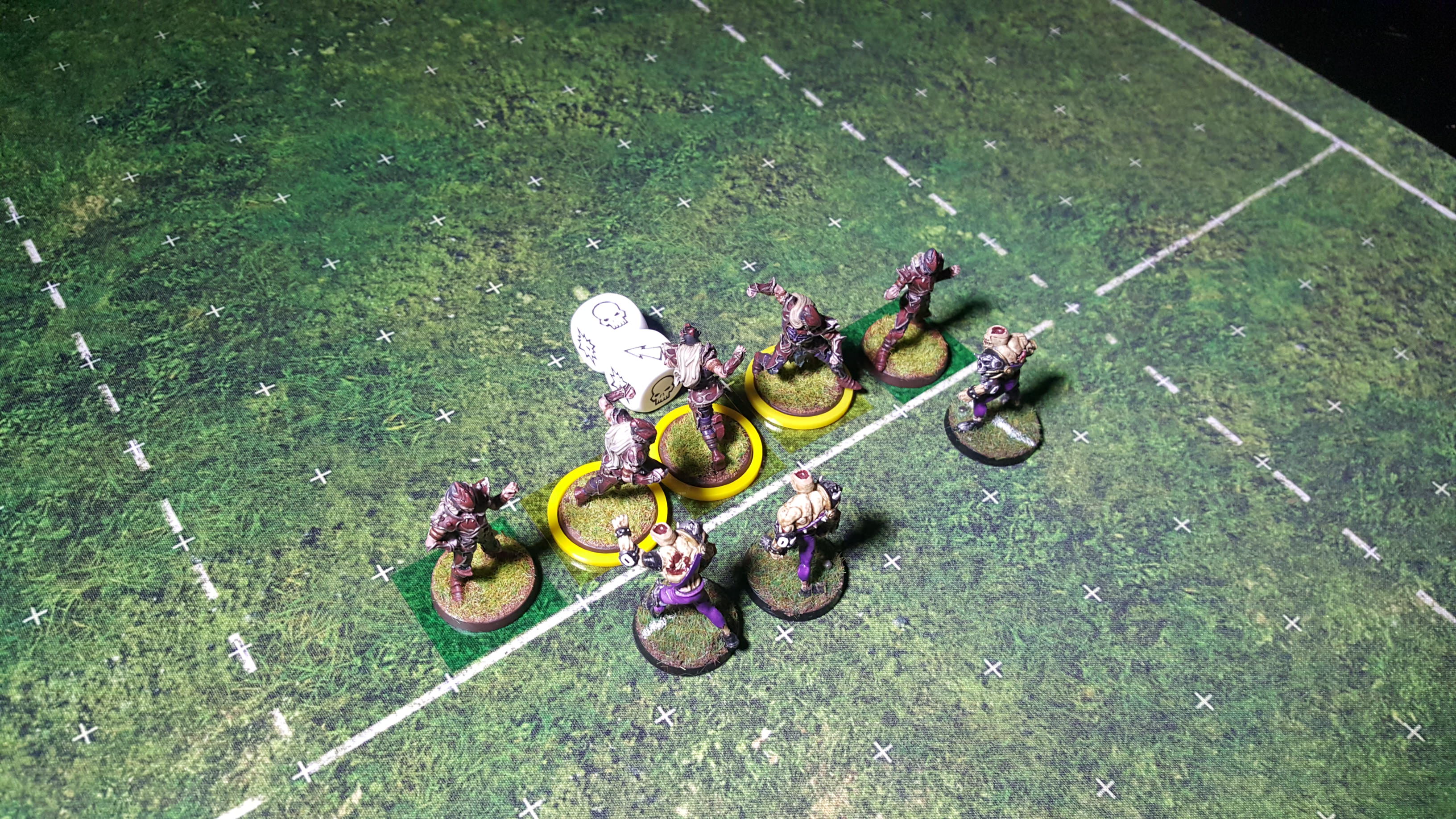 In this example we now have the central Dark Elf Blitzer making the first block, and it is against an outside Zombie. Now when the dice curse you with a push you can simply slide the Zombie along the line. This is great as it means you get a second chance to throw a block at them, keeping the maximum number of knock downs you can make at 4 as you are not ‘wasting’ your blitz on this player. 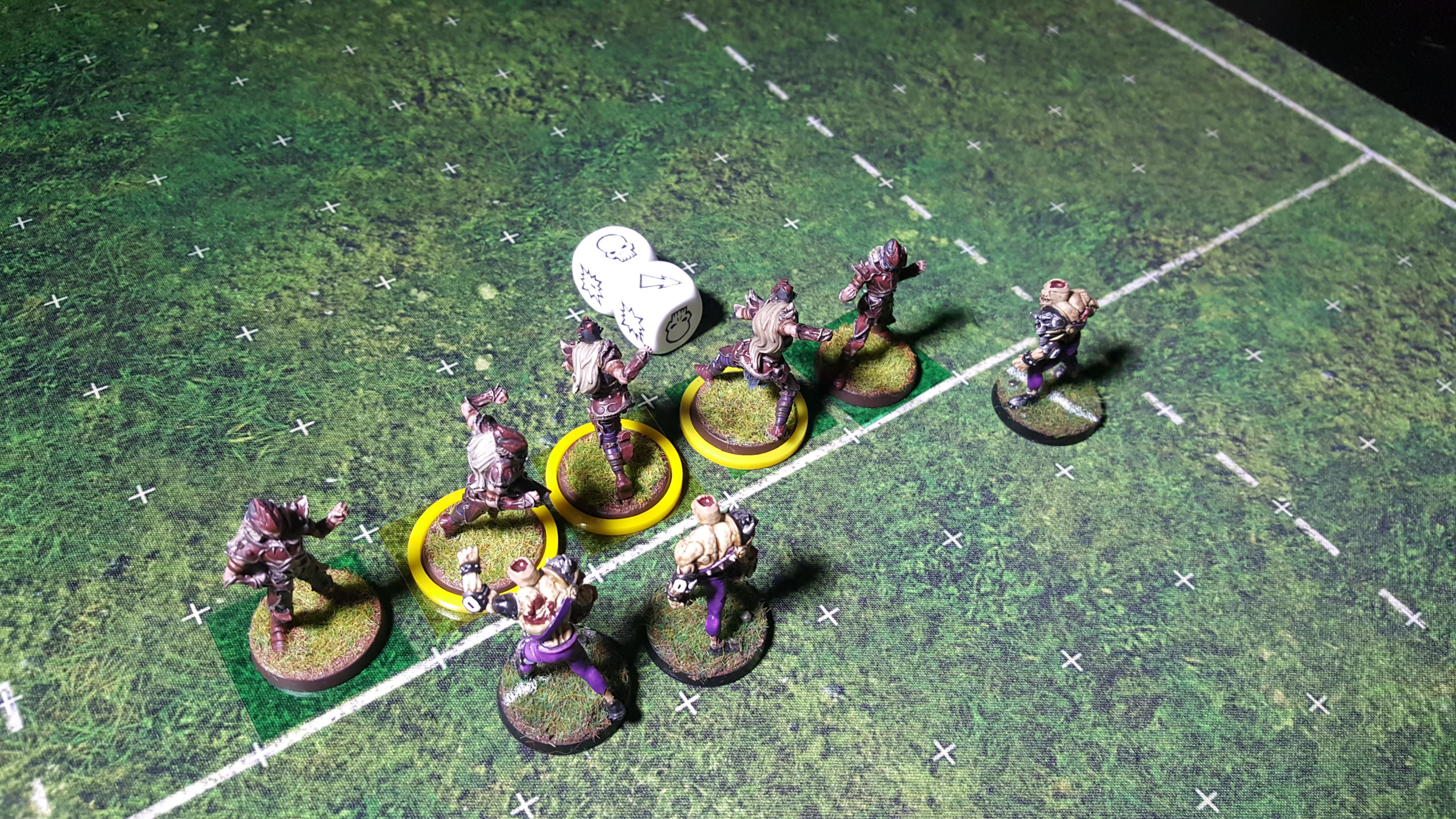 Let’s say that the annoying thing happens and you roll another push. This is still fine. The Zombie is pushed along the line again so it can still be blocked by the Lineman at the edge, meaning our total number of knock downs could still be 4. We have to be a bit careful as now we want to ensure that the final Blitzer takes their block first (as they have the Block skill), but this is fine as the Blitzer that just made the push is freed up to provide an assist. 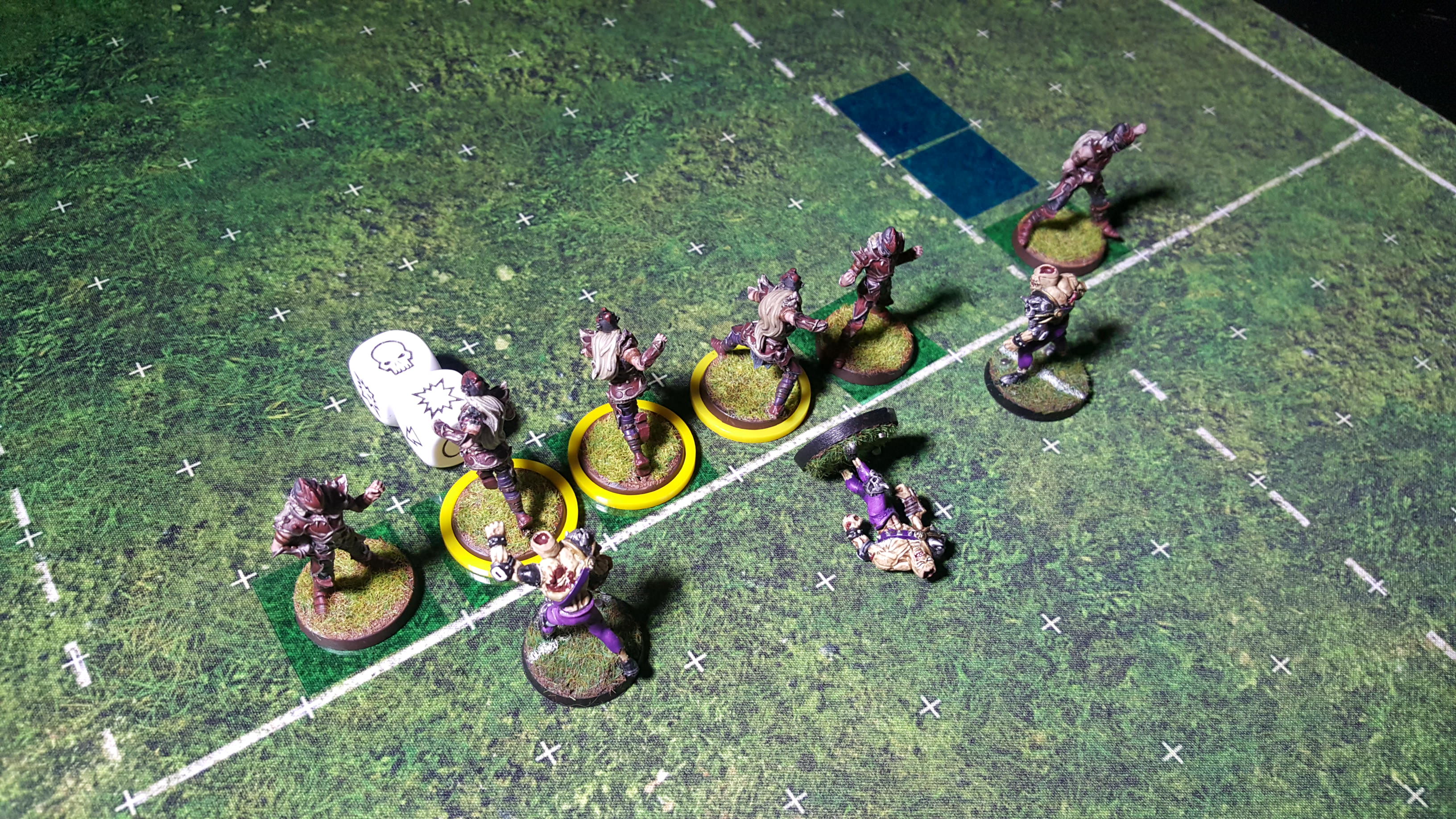 This time we find the Pow! and by moving up another Lineman we now have a 2 dice block on each of the remaining Zombies. Not ideal, but not bad considering the annoying dice rolls at the start.

Diagonal blocking is also really important when it comes to using Big Guys to hit on the line. Because they have Loner you don’t want to open your turn with a Big Guy blocking as even with the Block skill an unlucky 1/36 means you have wasted your entire turn. This is a total disaster on turn 1 as well because it’s like giving up a Blitz! kick-off table result – but worse as the enemy players on the line of scrimmage are allowed to take an action. You could find your offence on the ground or elves in your back-field before you have got close to the ball, and nobody like elves in their back-field. So you really want to engineer 2 assists so that they get 3 dice (assuming St5 vs St3). 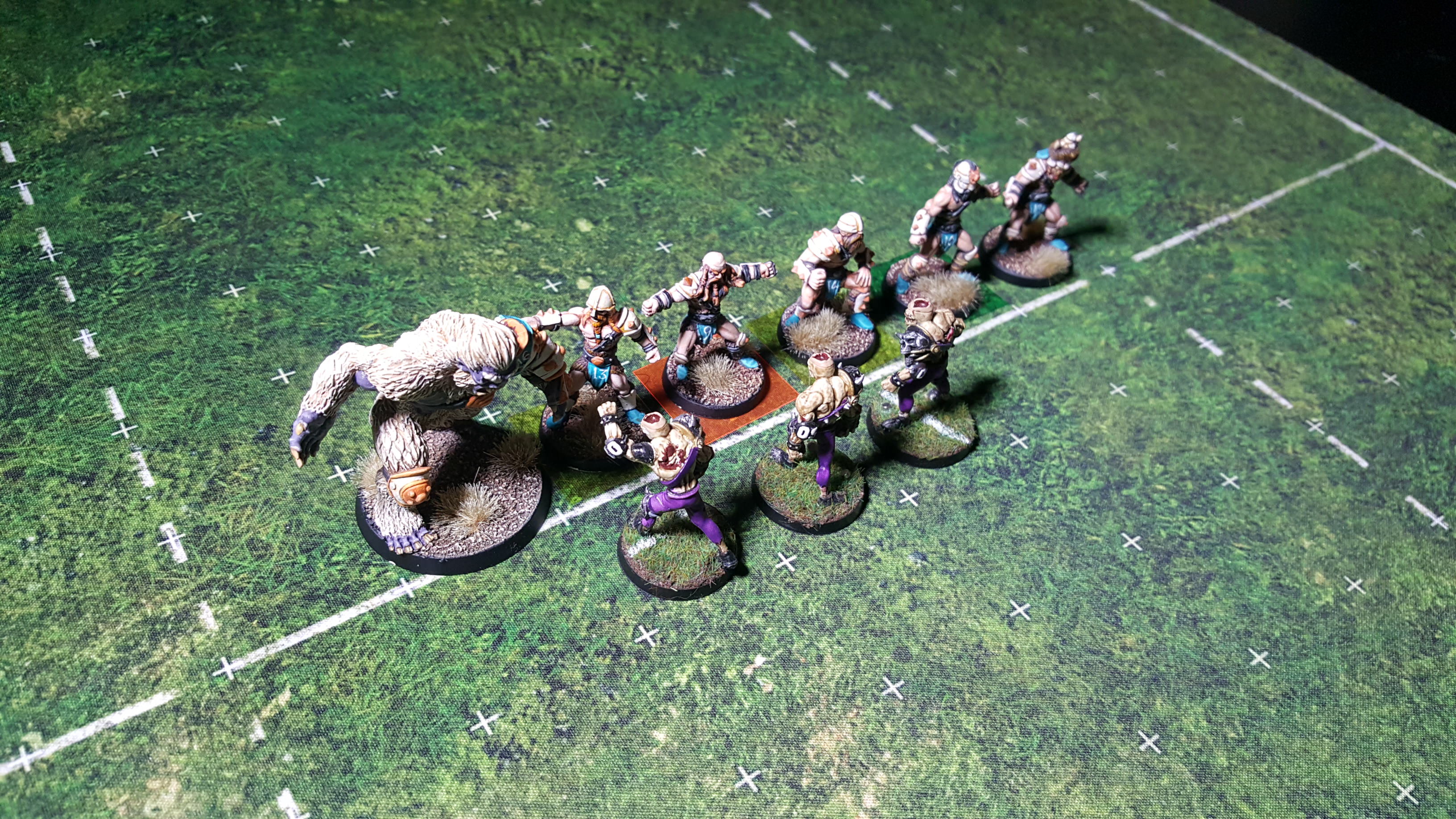 In this example I’m just using the Snow Troll and Norse Linemen for the offensive drive as we’ll come to Frenzy later. The principle here is exactly the same as before. We’ll block from the player in the most amount of tacklezones diagonally out and if we roll a push we will move the enemy player down the line of scrimmage so that successive blocks may be taken. 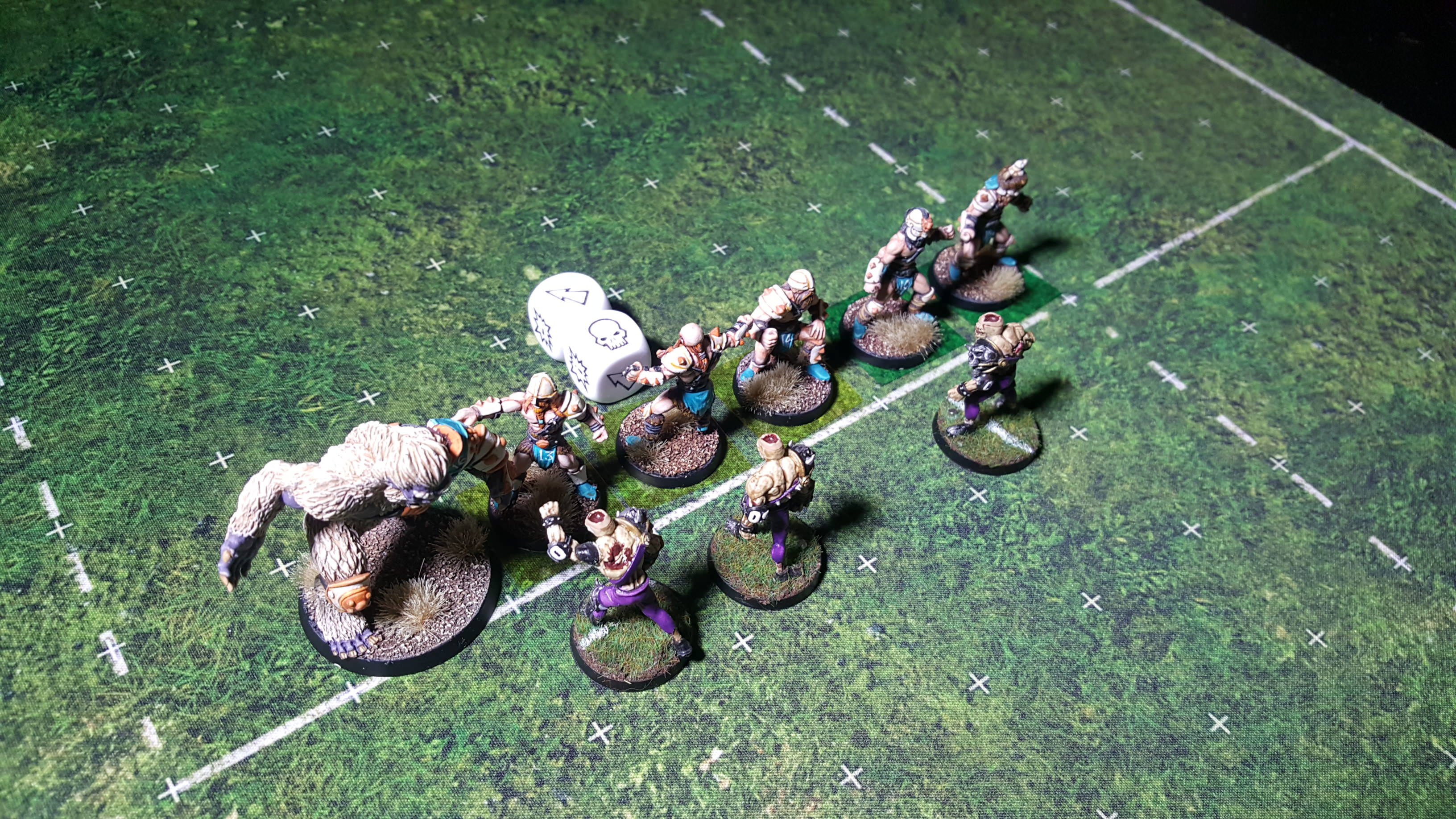 A push is rolled and once again we move one player along blocking diagonally outwards against the same Zombie to free up tacklezones. 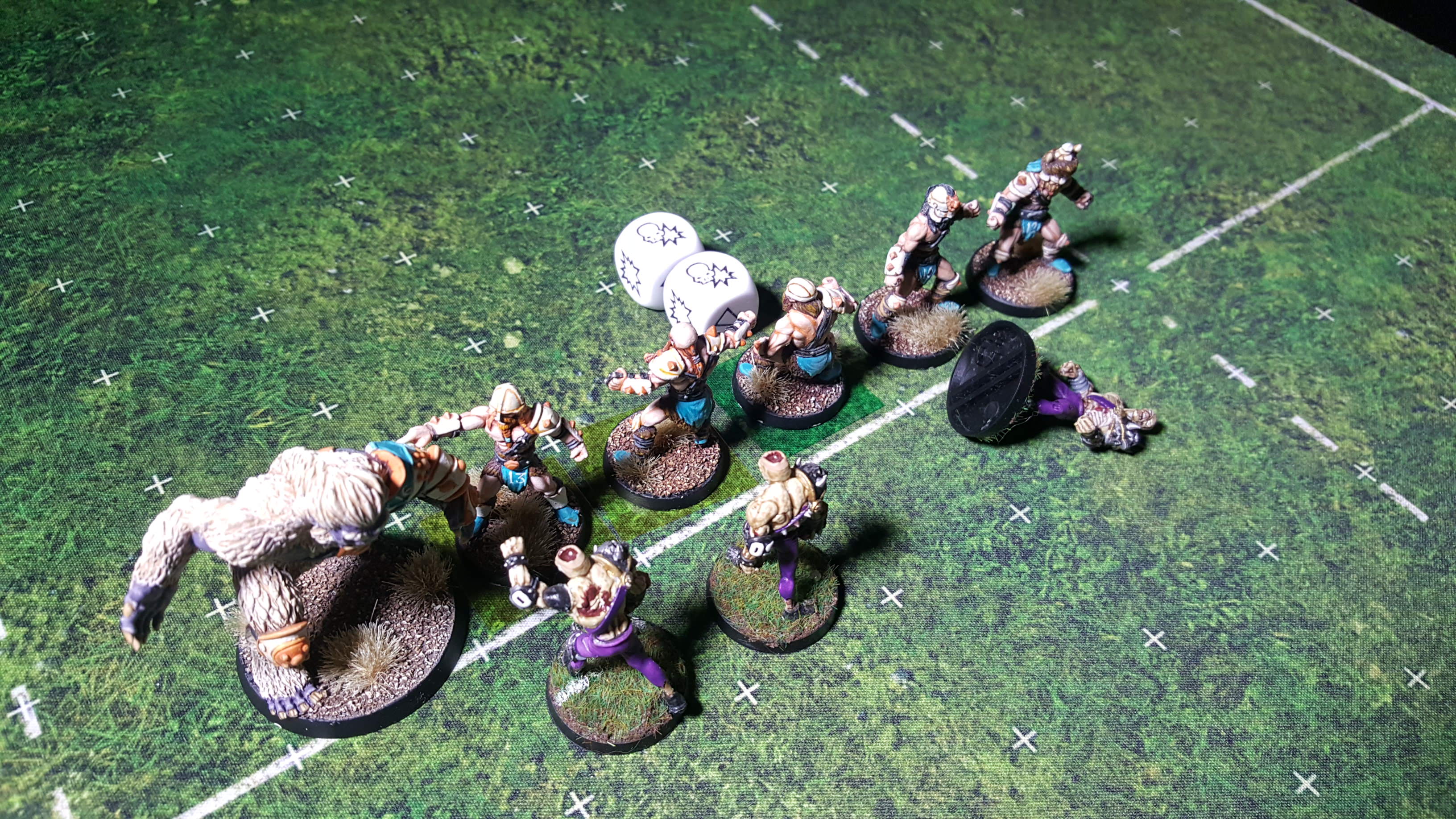 This player rolls double Both-Down and the Zombie falls in the square it is in. Now that has happened the player making the block is in a green square meaning they are providing the assist to the outermost Zombie on that side for the next player to block. 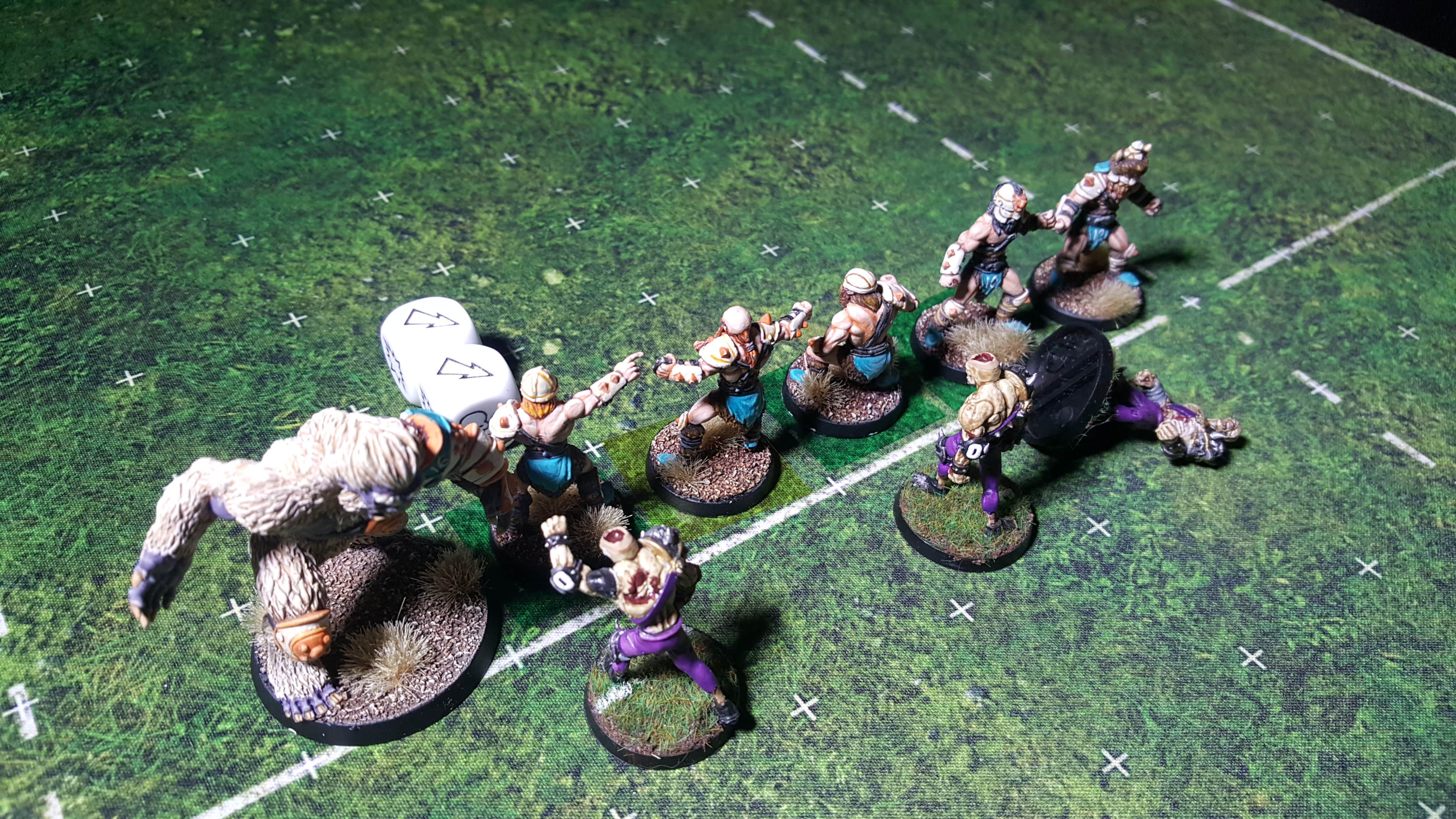 Frustratingly it is another push! A 75% chance of a knockdown and we’ve rolled pushes twice now. If this were a real game and not a contrived scenario I bet you’d be cursing your luck about now. But actually this isn’t a problem because we can push them into a Lineman that hasn’t blocked yet. This means we’re still at a maximum of 4 knock-downs. 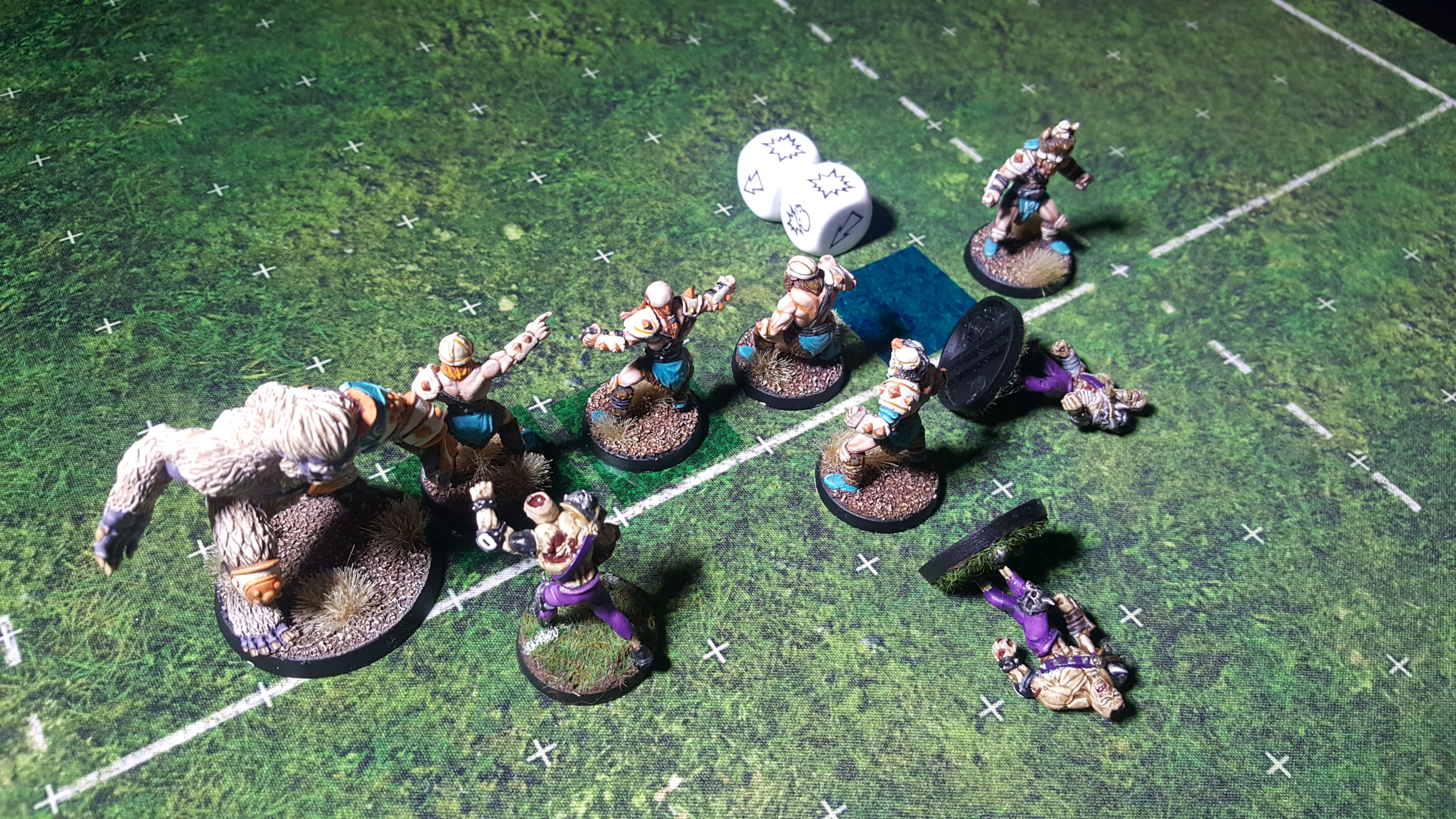 We finally find a big hit and this time (again for the purpose of a contrived example!) we decide to follow up. Now all the tacklezones are clear and the Snow Troll has 3 dice on the block. 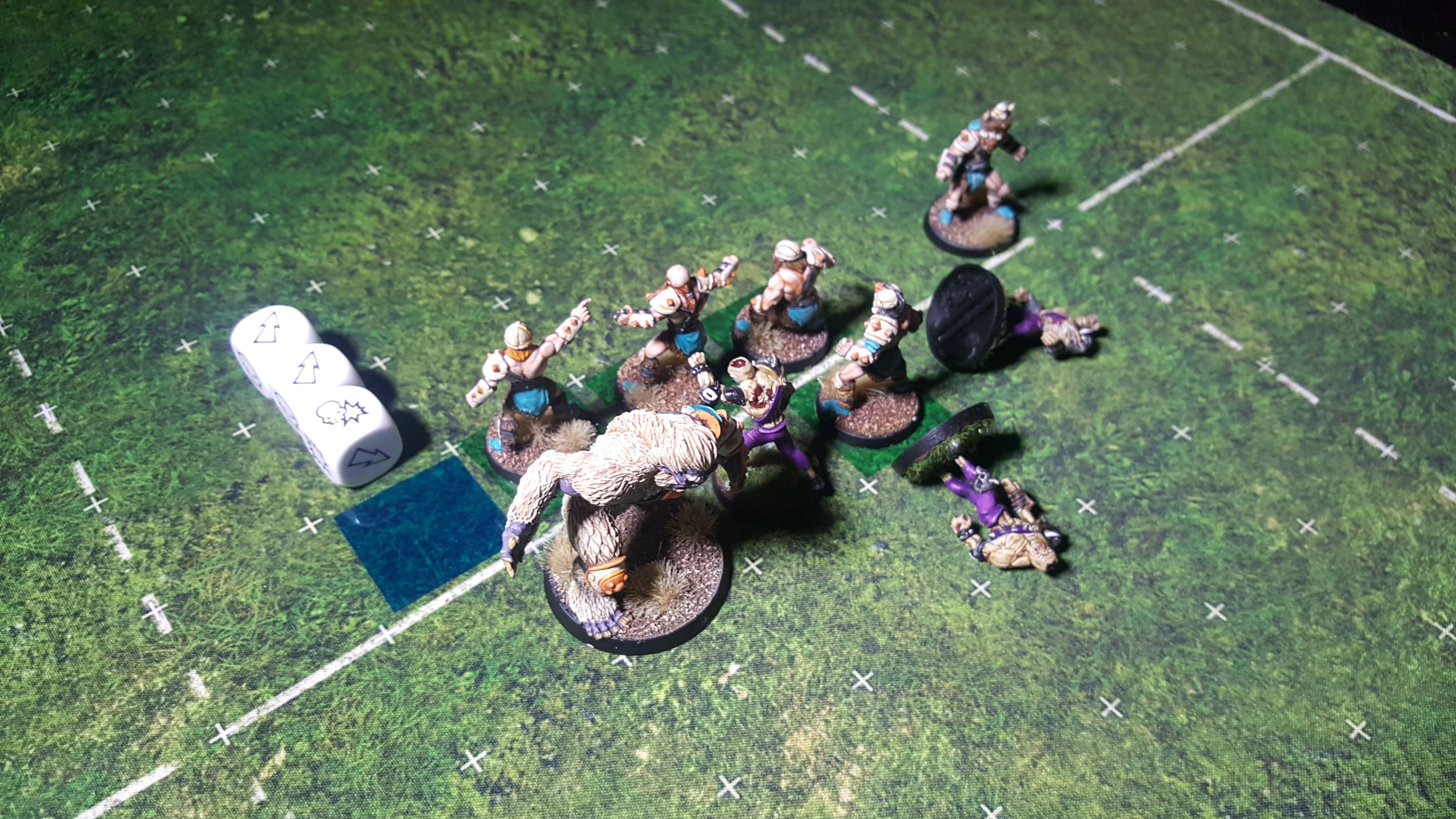 The Both-Down is no good as the Snow Troll does not have Block, so we take the push along the line to maintain the 3 dice block and hit again due to Frenzy. 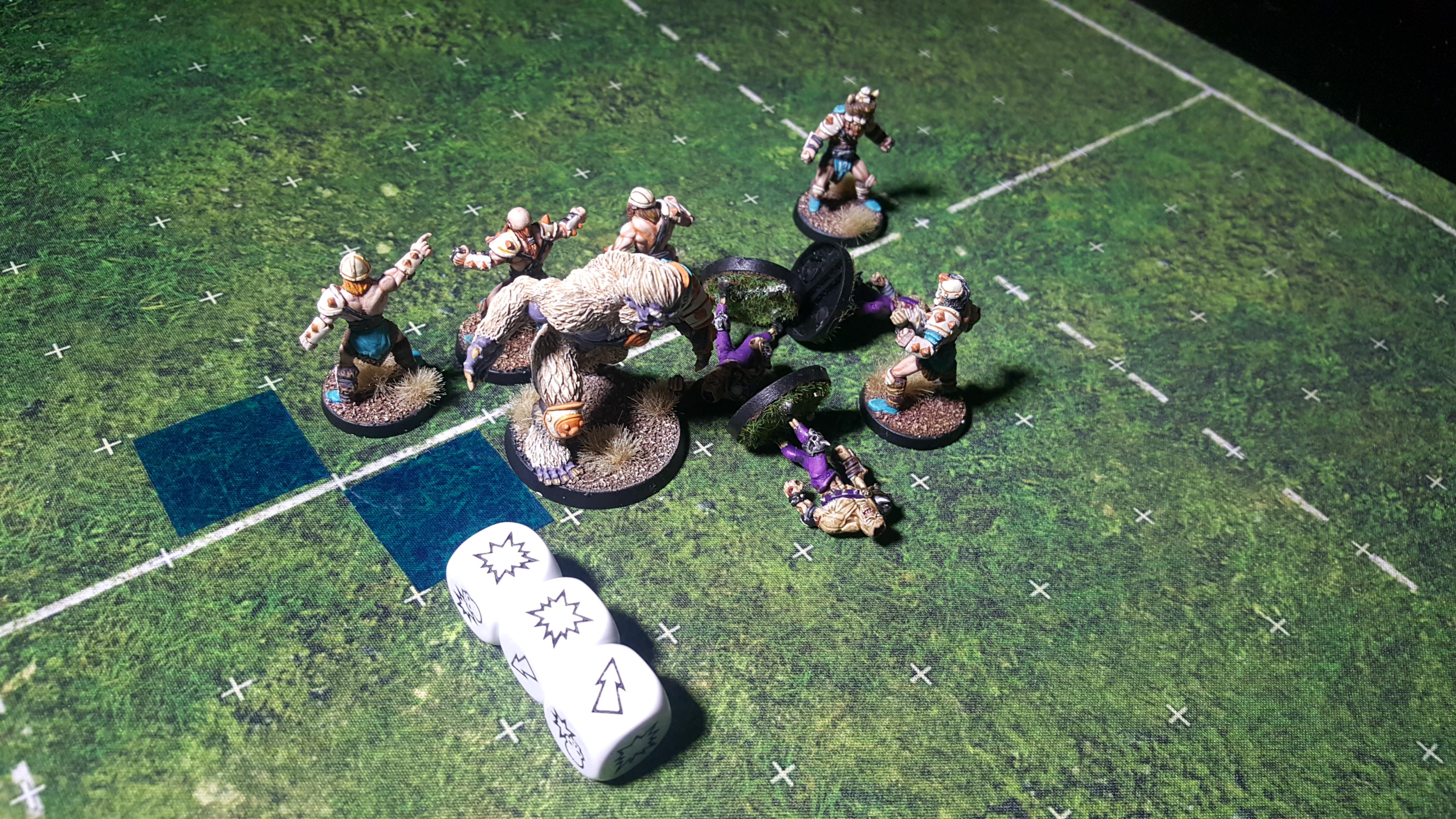 We get the Pow, and for good measure we chainpush the Zombie into our own Lineman who then gets pushed forwards into the gap. This in a real game would give us a lot of options. It is an assist against any player that would be adjacent to them (the initial setup picture has a Flesh Golem). It has also completely trapped those Zombies among a lot of Norse players. If they were Elves then some sort of foul would be on the cards for sure! It’s not really worth fouling a Zombie, but even then the opposing coach is effectively 3 players down for a turn. And if they decide to stand them all up then they have to face a run of free blocks against them. A couple of armour breaks could give the offensive drive a real foothold in the game.

Yes three exclamation marks. When you have multiple Frenzy you can take these pushes to a whole new level. Consider this: 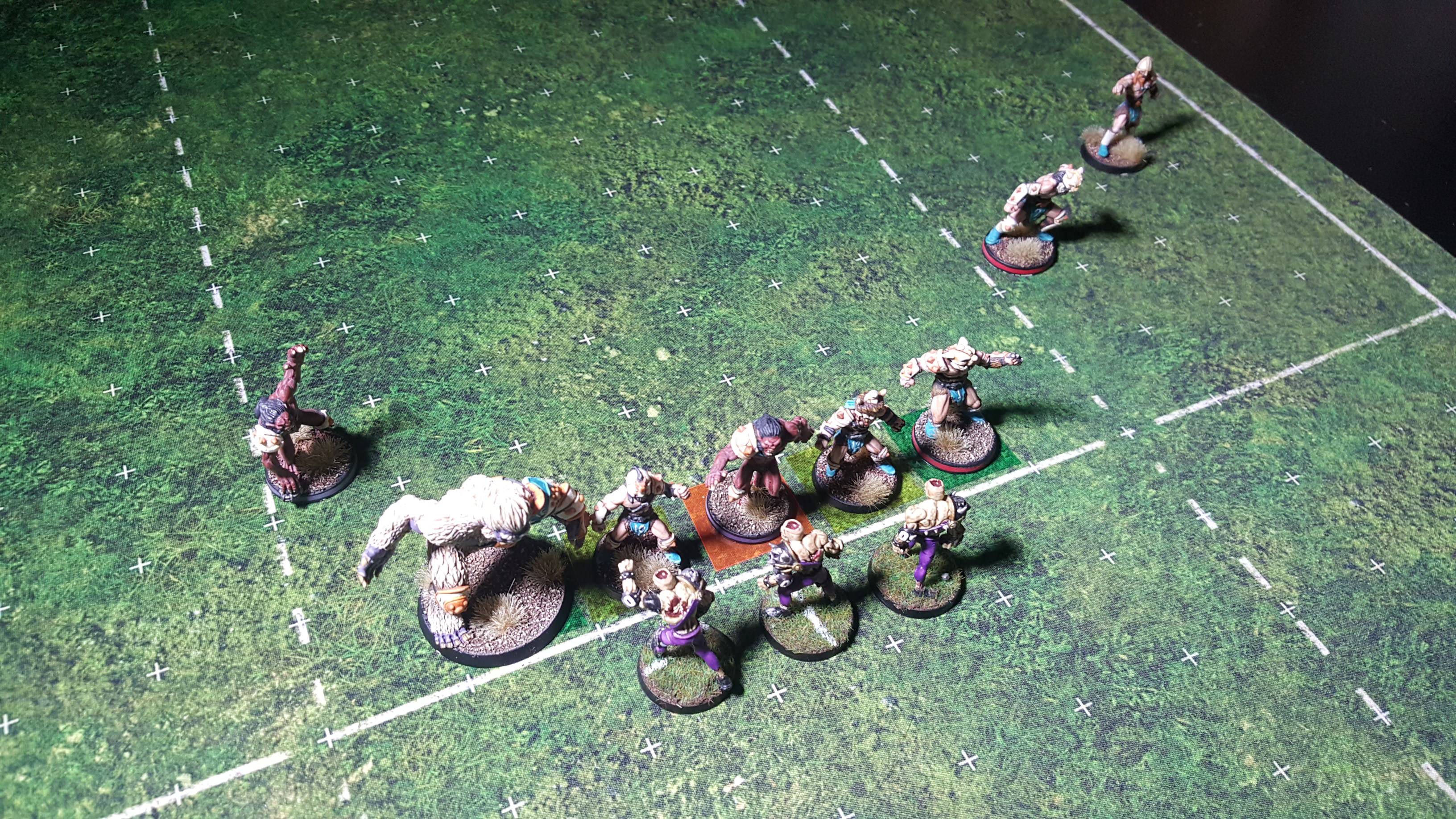 Now this is not an unreasonable setup. We have a strong line of scrimmage with another Blitzer and Lineman covering the flank. The Ulfwerener to the left is preparing to make a blitz action, but it is the one in the middle that opens up the blocking. Let’s say we have a “disaster” and get nothing but pushes… 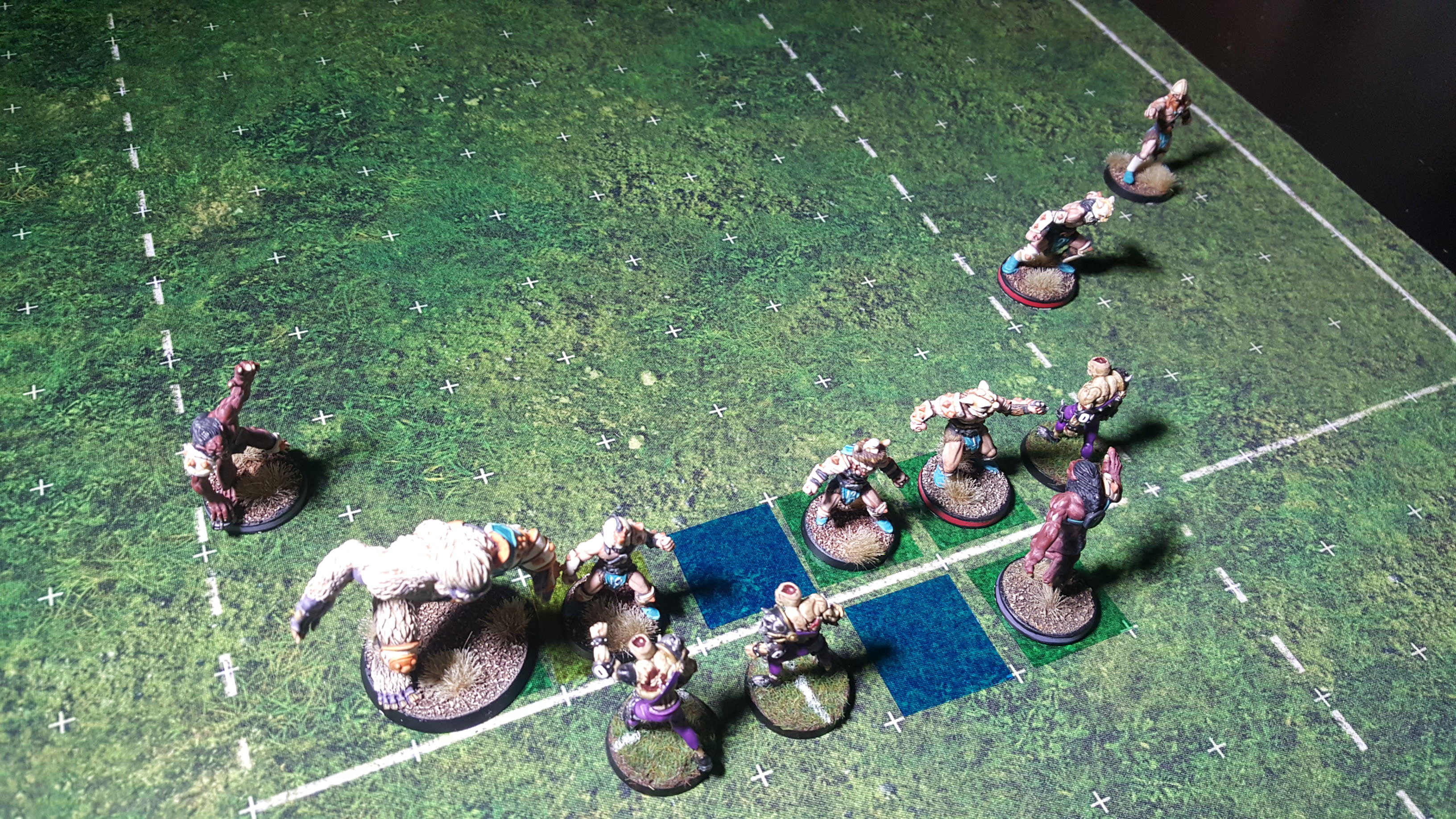 The first push takes the Zombie along the line, but the second one takes it over the line and into the Norse half of the pitch. Next up the Blitzer has a block, first assisted by the Ulfwerener, and then by the other Blitzer. 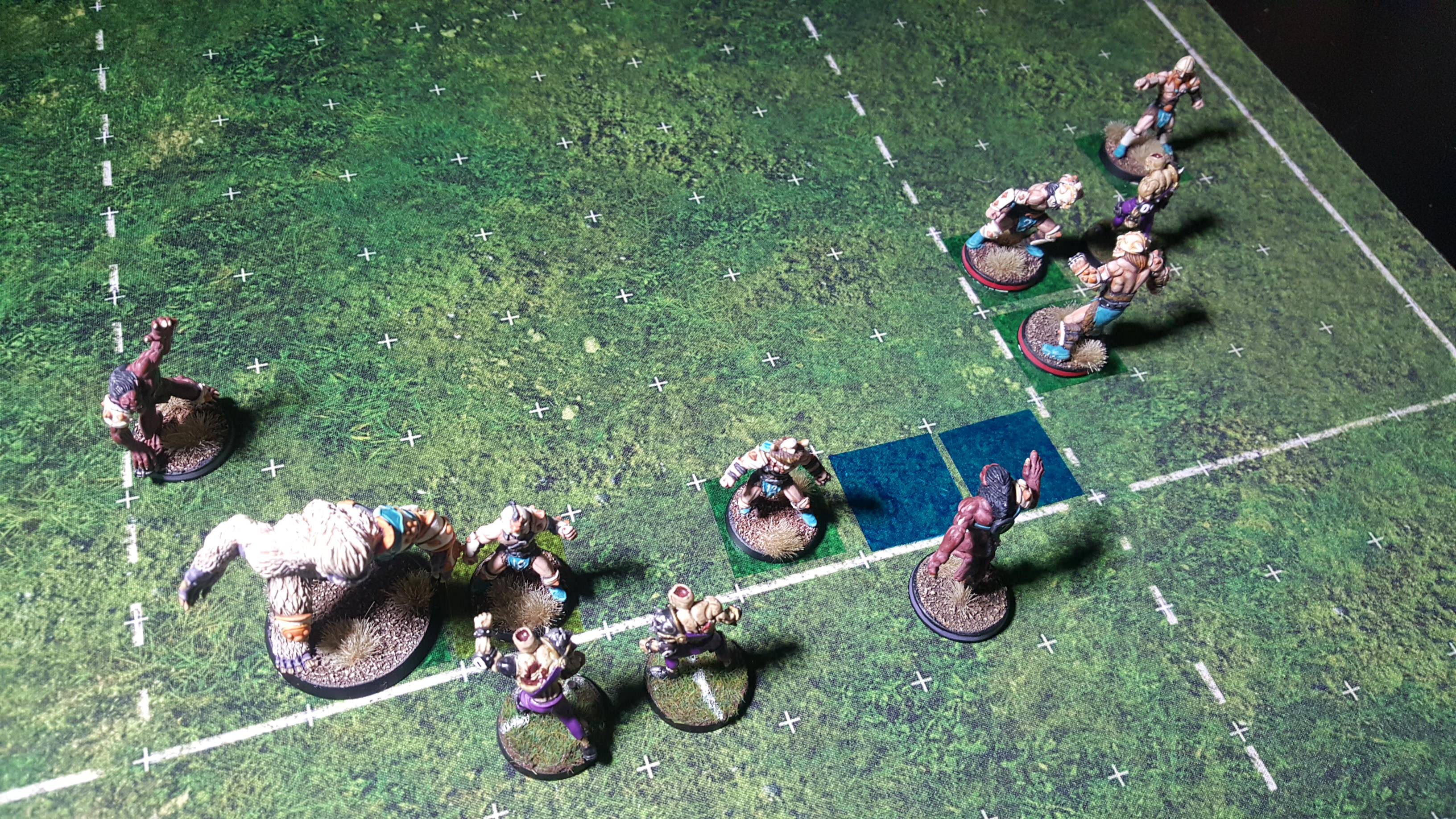 And you can quickly see where the Zombie is headed. Now this is not super likely because you do need a push on each result (55.6% chance). But don’t think of it as an attempt to surf the Zombie, think of it as a reward for a host of bad dice rolls! Also if that Zombie is isolated from the rest of the team it’s not likely to be playing a big part in the defence. And all this without compromising the blocks in the middle, as we shall see: 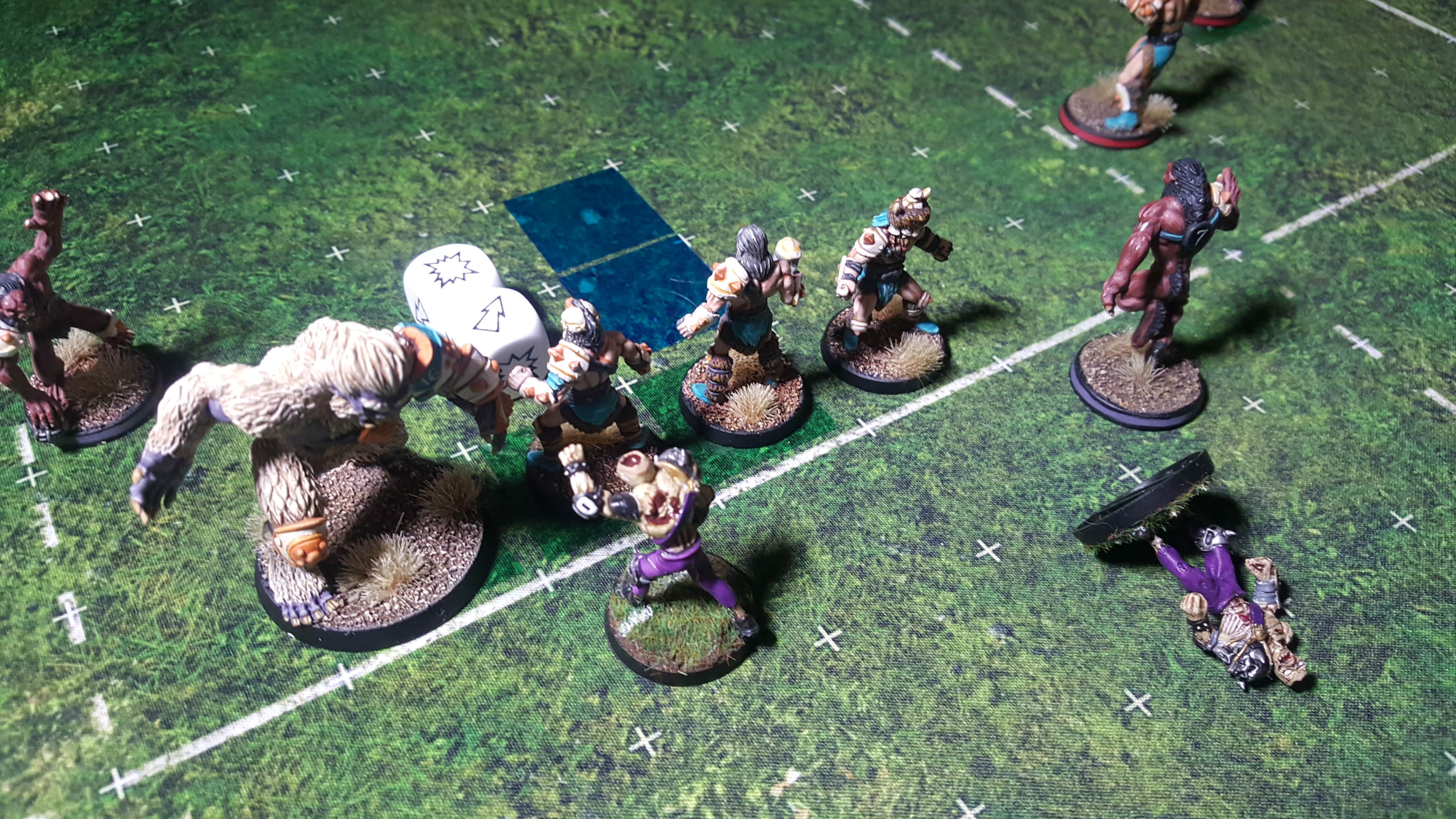 The next player can block another Zombie, and we see that this opens up 3 dice blocks for the Snow Troll.

Always expect your early blocking to be a bit rubbish and mitigate against it by blocking diagonally and pushing along the line into the waiting fists of team-mates. If you do it right you have a great chance of ensuring that all enemy players on the LoS are knocked down giving you much better chances to control the centre. This can allow you to set up a strong drive as the enemy defence cannot just pile into you as you have options to go to either side. You can set up a strong line or cage without any early mishaps, which puts you firmly in control of the drive.