Hello, and welcome to the first of my series of articles on positioning. One of the things I love about the game (other than smashing up Elves) is the combination it has between spatial positioning and risk calculation. Being good at working out the odds of a play working is a great advantage, but good positioning is how you modify those odds to be more in your favour. Whilst it is frustrating to look back at a game and realise that you lost because one defender was just wrong by just one square it is also great to play a game where such fine tuning matters.

Positioning, therefore, is a huge subject, and not possibly covered well in just one article. So we’ll start with the basics and build up. Apologies to veterans who already know much of this, but we have to start somewhere.

And the key to positioning is the tackle zone!

Moving a player is the only part of the game where no risk is involved. And by risk I specifically mean that you do not have to roll any dice. All players have a base movement that they can make for free, and this gives them a zone of control. It looks like this: 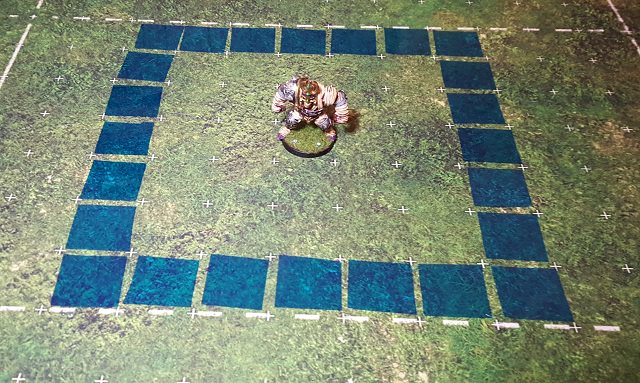 The mummy has a Mv of 3 meaning it has a zone of control 3 squares in any direction.

One way of reducing the opposing players’ zones of control is to introduce barriers, such as a line of your own players. As players cannot move through another player’s square this completely blocks them off. 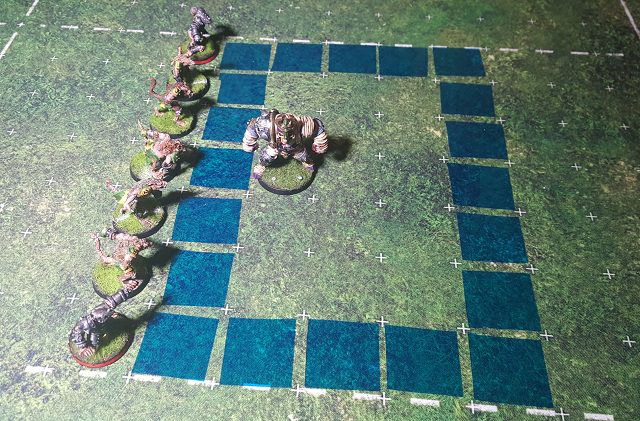 The line of rats completely blocks the mummy’s movement beyond them.

This approach is quite impractical. With 15 squares width on the pitch and only 11 players per side (if you are lucky!) it is impossible to completely close down areas of the pitch just by blocking them off. However all players exert a tackle zone, and whilst this does not reduce the zone of control (it is still possible for a player to get to a destination through tackle zones) it can severely reduce the chances of the player getting there. So you can close off areas of the pitch not by blocking them off, but making the odds of getting there so low that it is very unlikely to succeed. Your opponent probably won’t even try it. 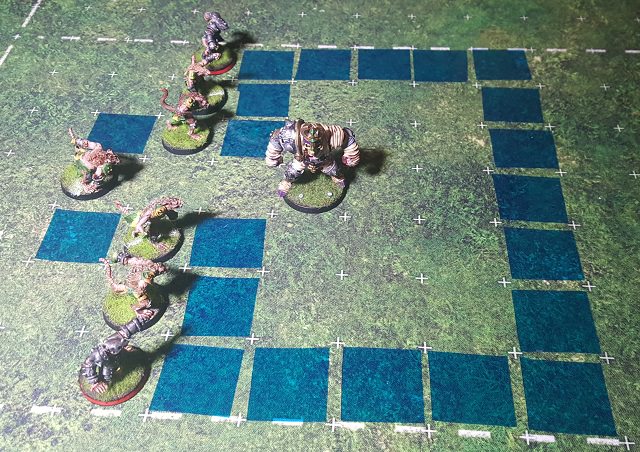 The mummy can try and break the line but there is just a 1/36 chance.

This is the most important fundamental principle of tackle zones. They are there for the sole purpose of increasing the chance of the other side failing an action and turning over to you. All positioning should be thought of along those lines: does this move increase the chance of the other side failing? If your opponent is complaining that they are having bad luck then it is often a sign that you are doing something right by forcing them to make dice rolls. The only guaranteed way of improving your luck in this game is to roll fewer dice!

For this article we will use some colour coding to help explain the points being made. A blue square, as you have already seen, represents free movement for a player. This may not always be present but typically is there to help pick out weak points in formations. The other colours will all be used to display tackle zones, with green indicating that one player is exerting a tackle zone into that square, yellow for two, orange for 3, and red for 4 or more. 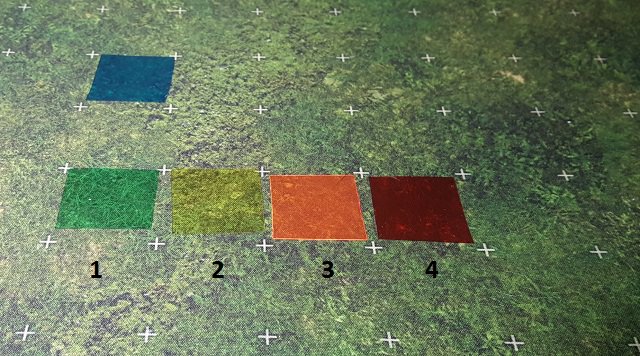 Let me know if(when!) I get any wrong!

So here’s an example of what a single player’s tackle zone will look like: 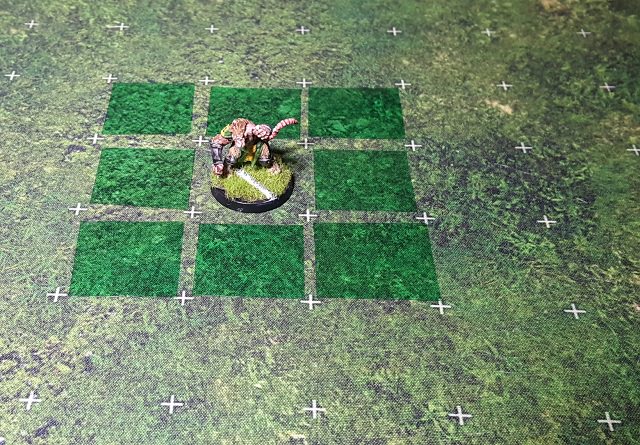 A single player exerts 1 tackle zone into all the squares around them.

And here’s an example of a cage: 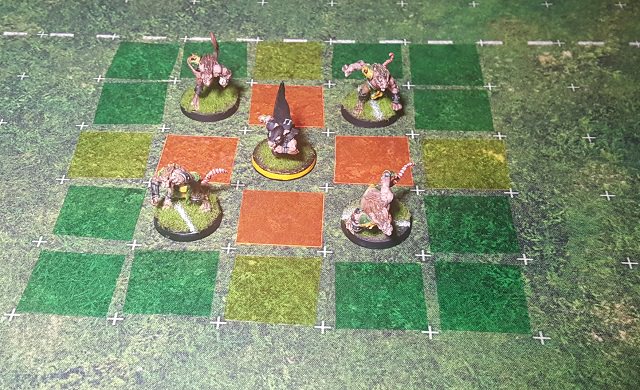 When you move a player next to an enemy player they will be forced to dodge if they want to move away. However as the penalty for dodging is based on the number of tackle zones you are dodging into this does not present much of a risk for many types of player (namely those with Agility 4+ or the Dodge skill). 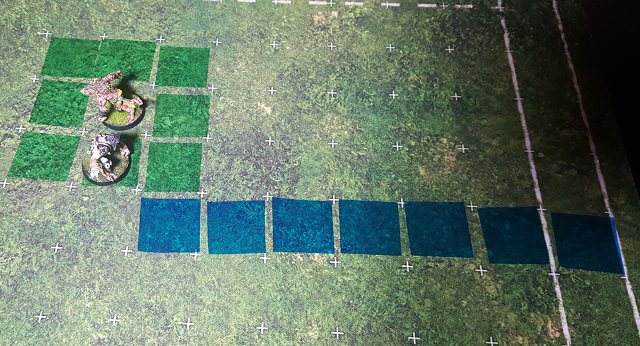 The ghoul can dodge into an empty square and score (83% success).

Alternatively you could look to blitz away the adjacent player, leaving your other model free to move away without dodging. The advantage is that often blocks have a higher success rate. The downside is that it uses your blitz. Whilst this can force you to spend resources combating the situation, generally they are not hard to get out of. This is known as tagging the enemy. 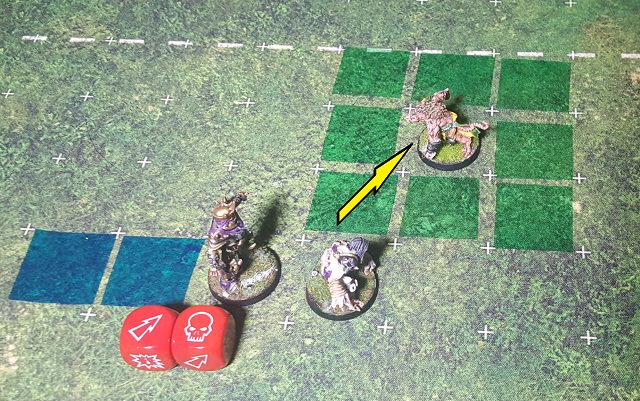 The wight can blitz the linerat away, leaving the ghoul free to move.

When you want to force the other side into something more dangerous you will need additional players. This is known as marking the enemy. However just using more players does not automatically guarantee that the mark is harder to escape than a tag:

The additional line rat does not prevent the ghoul from dodging into an empty square.

Here is an example of it being done correctly: 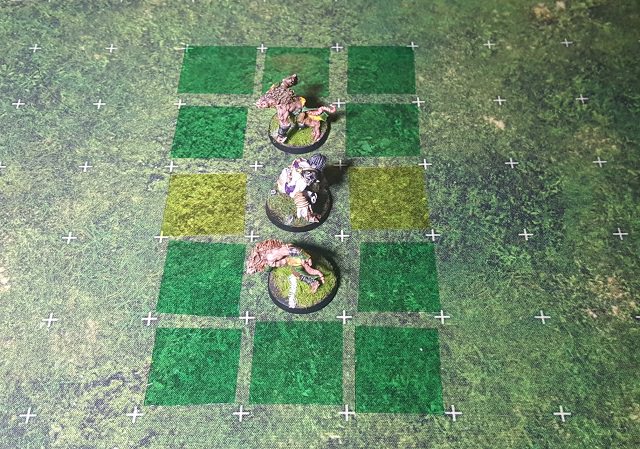 If the ghoul has some help then the odds of success can increase a lot. If one of the linerats can be blitzed away then you are back to being tagged. 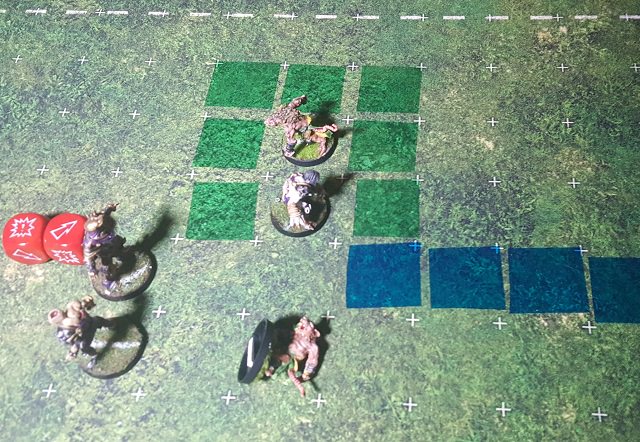 A zombie moves up to tag one of the linerats and provide an assist for the wight to blitz it away.

As 2 dice blocks (2db) are the mainstay of the game, it is not a huge advantage to mark a player if your opponent just needs to throw one of these to reduce it to a tag. For this reason we split marking into hard marking and soft marking. As a rule of thumb here is how you classify it:

The difference between a soft and hard mark is therefore situational, and depends not just on the positions of the players involved but the availability of other players. The last example was a soft mark because a zombie and wight was available to make the blitz and open up the space for the ghoul to dodge away with no penalty. But if the rat player had blocked the zombie and ghoul then it would have been a hard mark. 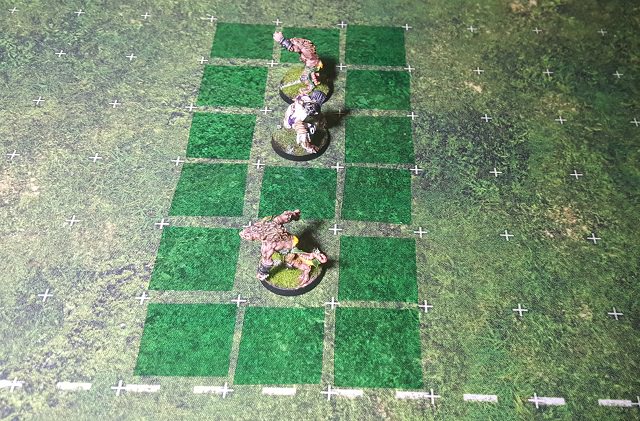 Another type of mark where the second player does not move into contact.

Here is another mark that is situational. This is a soft mark because the ghoul can take a 1db and even on a push can move away without dodging. But a change of players can change the type: 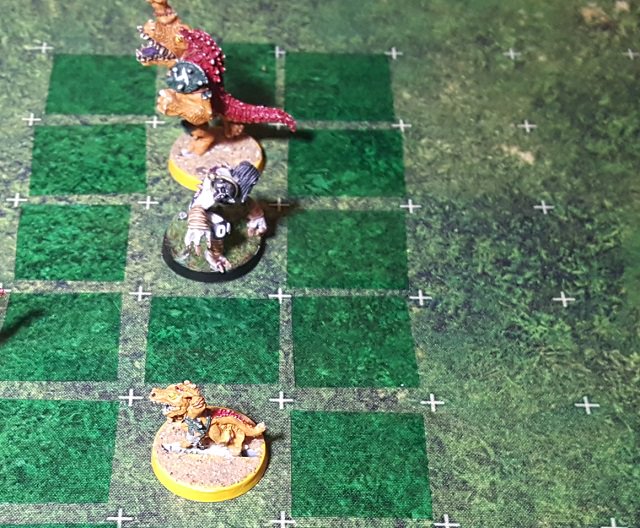 The St4 saurus means the ghoul needs a 2 dice block with the opponent choosing (a 2dba).

This is now a hard mark (assuming no other players available) because the ghoul can no longer take a 1db to push the saurus away. In fact this situation would be weaker if the skink moved in, as that would allow the ghoul to blitz the skink for a 1db and then on a push dodge away into an empty square.

Clever use of positioning can also increase the chances of getting away. Here we have a soft mark (although the ghoul can dodge into an empty square 2 linerats are being used). But with a little help from some friends there is a chance the ghoul can get away without needing to dodge. 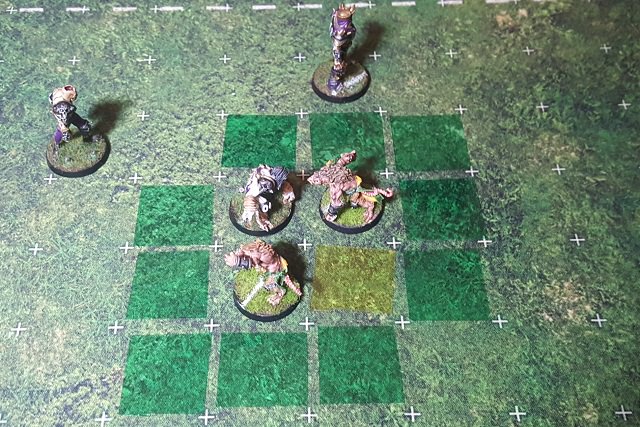 First the zombie moves in to place an assist on the linerat to the right of the screen. 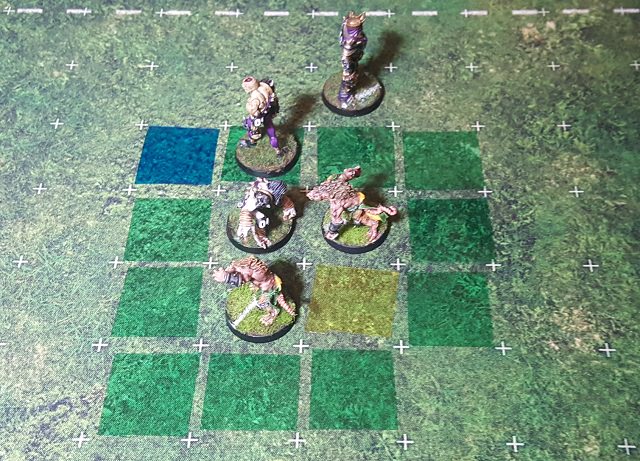 But in doing so it also blocks off all 3 squares to the left of the linerat it is putting an assist into. Now a blitz from the wight… 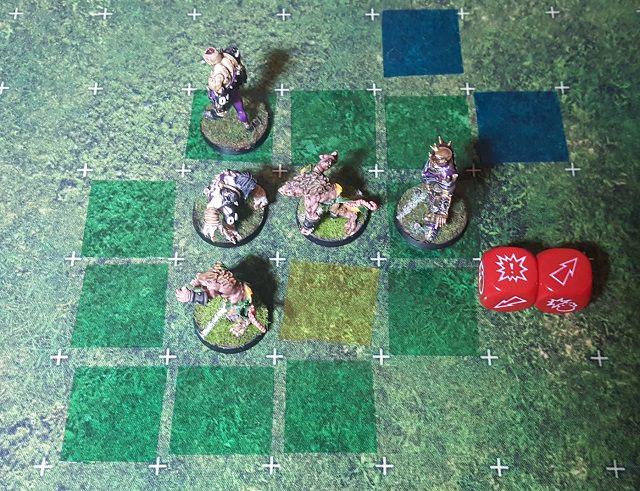 …and the wight can chain push the linerat into the other one, pushing that away from the ghoul. 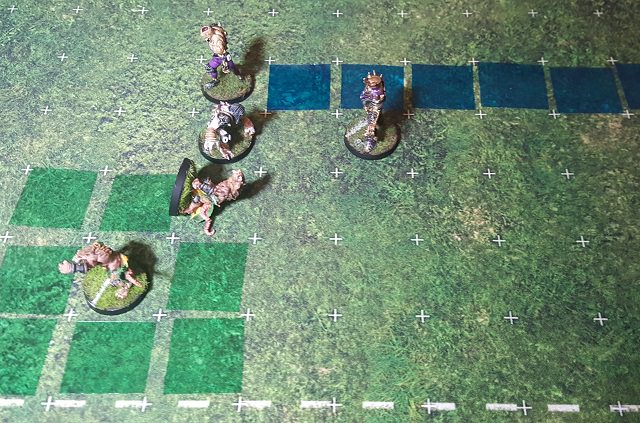 Now the ghoul is not in any tackle zones and is free to move and score.

The sharp minded among you will have already jumped ahead to thinking about skills and they affect this. For example a player with Sidestep stops you just using a 1db to push them away so you no longer have to dodge, turning a soft mark into a hard mark. Similarly skills like Stand Firm, Block, Dodge, Tackle, Fend, Wrestle, and others can adjust the odds for what can be done. These situations are far too numerous to list out but think of them along the principles of whether they turn a soft mark into a hard mark or vice versa.

Similarly these examples are based on the ball carrier having a good chance of making that dodge. This typically means an Ag3 or Ag4 player either with a Dodge or Team reroll. If there is no reroll or the player is low agility then that turns a soft mark into a hard mark. Remember that the only difference between these are the probability of the player escaping, the principle of categorising into soft marks and hard marks is about being able to quickly scan a position and make a good decision. Generally if that chance is greater than 66% then it is a soft mark.

And this is important because there is a golden rule of pressure – never use a soft mark!

It is fine to tag an enemy with a single player as that can force a dodge or eat up a blitz. But don’t commit a second player unless you can force it to be a hard mark. Otherwise this player is wasted when they can be doing more useful things in another part of the pitch. A common way you can lose a game is in committing multiple players adjacent to the ball carrier with no reduction in the chance of your opponent getting the ball away. It feels good because you are mobbing the ball carrier with many players. But as was written at the beginning, the question to ask yourself when positioning is does this move increase the chance of the enemy failing.