Myself (and Merrick) at Elflympics. Think this was about four GFIs into his spot prize-winning ten GFIs attempt!

I was really honoured to be invited to write an article for thetacklezone.net about advice for new tournament coaches… is how I’d like to start this article.

Unfortunately, I wasn’t asked, I just figured, a few tournaments in, there were some things I’d learnt that I would have probably benefited from knowing before I went to my first NAF tournament, so I shoved this article in front of the tacklezone.net webmonkeys.

Why am I qualified to write such an article? Well, I’m not qualified, I’ve only been playing for about a year, which kind of makes me qualified by default, I suppose!

Across the various Blood Bowl forums and groups there are often requests from new coaches for advice and guidance about how to approach their first tournament experience. Mostly, these are “what roster should I take to <insert tournament name here> next weekend?”, which this article definitely doesn’t cover. With only thirty-three NAF ranked games under my belt, all I can tell you, so far, is that giving a human lineman Thick Skull probably isn’t going to bag you the top spot when the prizes are being dished out. The more interesting “what should I…” posts, for me, are from people who are a little apprehensive about tournament etiquette and what to expect, beyond the games they’re going to play.

Some of us may have played lots of different games systems before Blood Bowl caught our attention. All of those systems (Warhammer 40,000, Magic: The Gathering, Pokémon, Age of Sigmar, X-Wing etc.) can be played competitively, which means you can probably find tournaments supporting that competitive gameplay across the world. Different games systems bring different types of player, resulting in different tournament atmosphere. For me, the very few Friday night Magic: The Gathering tournaments I went to were a real baptism of fire, so I stopped going. Disclaimer: Others’ mileage of M:tG may (and definitely will) vary. One thing that seems to be a universal truth with Blood Bowl though, is that it has one of the most welcoming tournament scenes of most table top games. It’s an easy game to play, but a tough game to play well. The term ‘beer and pretzels’ seems to have been created to fit Blood Bowl perfectly.

If a negative experience at other games systems’ tournaments makes you wary of trying a Blood Bowl event, I’d implore you to take the risk, you’re really missing out! 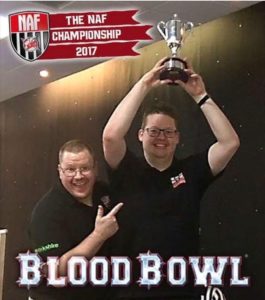 So, what advice would I have given myself, before I rolled my first Blood Bowl tournament dice against Hawca at CakeBowl 6 (I lost 3-1, he was playing Wood Elves and I probably scored my consolation touchdown by accident!)?

I’m new. I want to learn all the skills as quickly as I can, so I’ll just take thirteen different skills (inc. the aforementioned Thick Skull!) and I can see them all in action, at once. I won’t need to playtest this, I’ll be all-knowing by the end of day one – I am a genius!

Nightmare. I literally ran out of different coloured bands to distinguish who had what and spent most games looking at my own roster. Keep it simple. 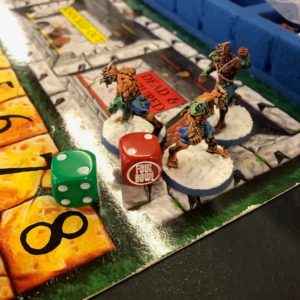 Foul Bowl dice. I found they developed a guilty conscience when it came to rolling fouls with them!

Set yourself a realistic aim before your tournament begins. ‘Crush your enemies. See them driven before you. Hear the lamentations of their women’ might the first turning on the road to disappointment, but scoring a touchdown each game? Winning one game to begin with? Those aren’t beyond the realms of possibility.

Tournament play isn’t for everyone; some people prefer the occasional pick-up game, or the story that unfolds over an entire season, but tournaments are a great way to meet local coaches and those that aren’t afraid to travel for their fix. There’s always something to laugh about once the dice have finished rolling. Hey, even the last place coach gets to take some form of cutlery home as a ‘prize’!

One final thing, if you’re reading this and aren’t a member already, consider joining the NAF. Membership means your results are logged and tracked against other coaches, so you can see who your bitter rivals are, even after 100s of ranked games. You can also find forums and members areas with useful resources to help new and existing coaches – including upcoming tournament calendars. There’s also annual gifts for signing-up, or renewing, and clearly we all love new toys!

The 2017 NAF gift: two dice and one counter (shown both sides) for signing up or renewing

If all else fails when you sit down opposite your opponent for that first round match-up, just roll sixes and Pows all the time, unless you’re playing me. With that said, if you end up playing me, you probably didn’t roll enough sixes and Pows in your previous game(s)!