For many people the summer means it is time to put aside the regular format of the game and switch over to some Blood Bowl 7s. This speedy variant is fast paced and action packed. The image above shows a slimmed down BB7s board – you’ll notice it has smaller dimensions and no line of scrimmage. Without further ado here’s Jip Jipperson to explain exactly what all the fuss is about.

Bar tabs, vehicle repair bills, radiation, vegetables, crazy exes. These are all things that are better in small amounts.

After six-months of playing Norse in preparation for the NAFC, I found myself saying “oh great, looks like I’m playing Blood Bowl 7s…” with alarming regularity, having watched my team’s AV7 crumble into dust. Recently, spearheaded by local coach Wobert, there has been a spike in 7s tournaments in my local scene, held at Incom Gaming, Cheltenham. Last night was the third of a series of tournaments, all ingeniously themed (so far we’ve had Lucky 7s, 7 Deadly Sins and 7 Wounders of the World).

Why should I care about Blood Bowl 7s, Jip, I only came online to reply “Leap” to a comment on Facebook, for the lols! A great question, imaginary person I just made up to allow me to further my sales pitch, thanks! Well, I bloody love Blood Bowl 7s, and wanted to expand on that a little to try and bring it to the attention of newer coaches who may never have heard of it, or grizzled vets who eschew it due to it not being ‘proper’ Blood Bowl. There are NAF rules for BB7s on naf.net, they can be found here. These rules were developed on behalf of the NAF by Shteve0, Gaixo, Coma, and Nazgob. There aren’t actually many differences from regular Blood Bowl (touchdowns are still scored, Wardancers are still annoying and GFIs across the line are still 98.6% likely to fail), but the few changes that have been made have a big impact!

Here is a summary of the NAF ruleset. Various tournaments may run a few changes to this (our local tournaments have themed rules, for example), but they’re a clear basis to build on:

As part of the slimming down of ‘normal’ Blood Bowl, BB7s matches are made up of two 6-turn halves, rather than the normal 8-turn halves. A special BB7s pitch is used. The pitch is divided into three six-square zones, plus two one-square endzones lengthwise, for a total pitch size of 20 squares long by 11 squares wide. When the ball is kicked off 2d6 are rolled to determine scatter and the lower result is used. Seven players are set up per team, all behind their own Line of Scrimmage (LoS). One player is allowed in each wide zone per team, while a minimum of three players on each team must set-up on their team’s LoS. 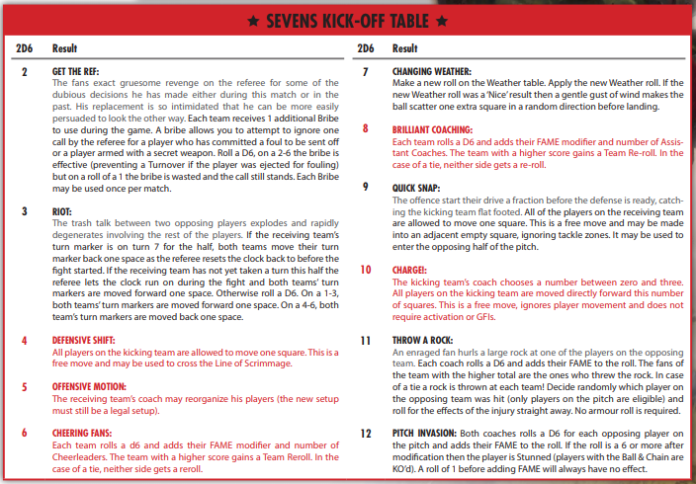 In my experience, the rules for setting-up, combined with the pitch layout means a real swing in the lifespan of (usually more fragile) agility based teams because the ‘free’ hits on the line of scrimmage no longer exist. It also impacts (predominantly) slower bashy teams, due to the gap between the two teams at kick-off. As an example, a Dwarf team won’t be able to even get a Blitz on the opposition from kick-off, due to the six squares they would need to get in contact with someone. Counterintuitively to that, the low AV and price of high AG players matched against the lower cost of bashy positionals means that, if you do start removing players, there can be a seismic shift of success based on the number of players left on the pitch. Of the 26 NAF sanctioned races, currently Chaos Chosen, Khemri, Lizardmen, Necromantic, Shambling Undead, Underworld and Vampires are yet to make an appearance in the local meta. Dark Elves, High Elves and Orcs (!) are the most represented teams, so far. 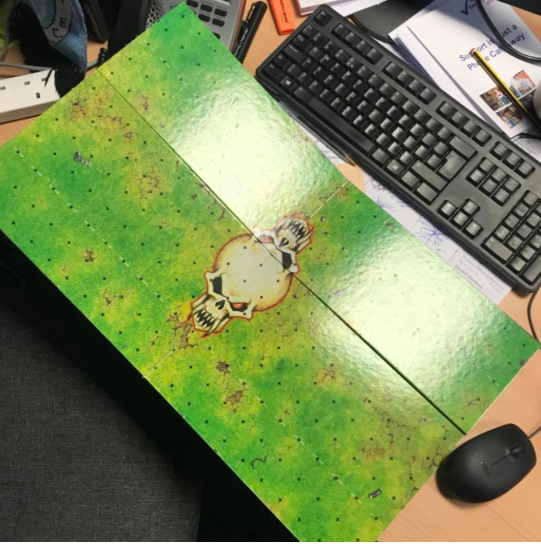 As a young Indiana Jones would say, this should be in a museum!

The question I found myself asking was why play this instead of regular ol’ Blood Bowl? Like many, I have limited hobby time and so have to choose wisely where to invest my time in. I think BB7s fills a really big gap in Blood Bowl, due to its simplicity, speed and learning opportunities. At the local events we normally play three games in an evening, usually averaging just over an hour a game. I love a good slog of Blood Bowl but, as a quick pick-up game, BB7s really scratches an itch. I’ve made a 7s board from one of the old 4th edition boards and can carry it in my KR case to tournaments to get a game in over lunch, if I fancy it.

BB7s is also an invaluable tool for welcoming new coaches into the game, it’s now my go-to if someone says they want to see what Blood Bowl is about. Learning the basics in an hour or so will be far more tempting than the prospect of sitting down for 2-3 hours slogging through sixteen (or more, with kick-off results) turns. Finally, the prospect of few (or, usually, no) re-rolls also adds a completely different element for existing coaches. I was fortunate enough to witness an Orc coach spend 120k on a re-roll, just to have it gobbled up by a Halfling chef before the first turn – no-one is safe! There are now no ‘reliable’ actions, which will really help you streamline your playing style to minimise risk and exploit mistakes; surely a lesson we could all benefit from when trying to get better at the game, regardless of experience.

In summary, the reduction in rules and size doesn’t impact the enjoyableness of this iteration of the game, at all. In my opinion, it actually increases it… sevenfold!

Jip (@JipJipperson), currently coaching in the SAWBBL and organiser of The Coffee Cup.